Microsoft has quietly released a new service To-Do with apps for Apple, Android and Windows devices plus a web interface. It’s in preview or beta.

To-Do lets you make simple lists of ‘action items’.  According to Microsoft what makes the service special is “With its intelligent Suggestions, To-Do removes all the clutter and empowers you to focus on what’s important, when it’s important. ”

It’s a preview, you can try it today from https://todo.microsoft.com

After a quick look, it’s hard to get excited with the initial To-Do. Doubtless the usual Microsoft supporters will come out with hyperventilated excitement.

To Do doesn’t appear to have any connection with other Microsoft services.  You can set a ‘due date’ for an item but that shows up in the separate Microsoft app, not with other alerts in Outlook or your Office 365/Outlook.com reminders.

My Day and To Do are the main lists of To Do items or you can make you own lists. 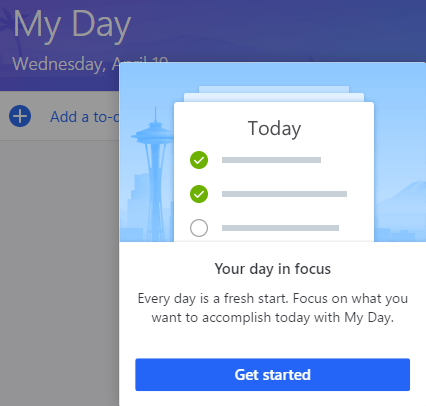