Use this trick to recreate a real Tweet that’s part of a document.  Or as a fake or joke tweet as part of a presentation. This, very sincere looking Tweet, was created entirely in Word.

The main trick is using tables for formatting.  Word novices think of tables for lists or grids, but Office smarties use tables to solve formatting and positioning conundrums.

Turn off the visible table lines and there’s no clue that the text, image and shape are all in cells. Here’s the above ‘tweet’ with Table Tools | Layout | View Gridlines on.

Here’s how to make the table.

The main Twitter font in Windows is a standard san-serif font.   Segoe UI which comes with Windows/Office. On a Mac try Helvetica Neue.

Make the following button from Insert | Shape | Flowchart : Terminator.  Before insertion, put the cursor in the top right cell.

Position and size the shape inside the top right cell.

At this point the shape is floating and won’t move with the table.  To link the shape to the cell, right-click on the shape, More Layout Options …

On the Text Wrapping tab choose In line with text. 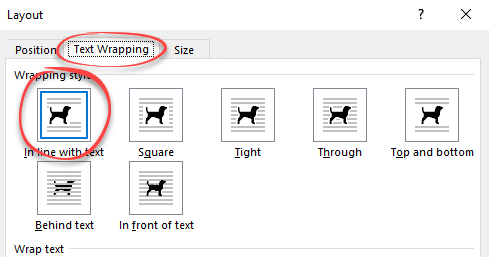 Now the shape is inside the cell and cell positioning controls work. Select the shape in the cell then Table Tools | Layout | Alignment then Center Top.

In the Formatting Tools ribbon change the color of the shape:

Making a table with this formatting is possible in PowerPoint but a little clumsy compared to Word. Though the red dotted guidelines in modern PowerPoint help with positioning.

We made the ‘Twitter table’ in Word then pasted it into PowerPoint.  Once in a slide, you can adjust the formatting to your needs.

In the above example we’ve enlarged the table, fonts etc. to fit across the slide.