Word has settings to automatically change the case of words that you type, fix common capitalization typing problems add items of your own to have capitalized the way you want them as you type. 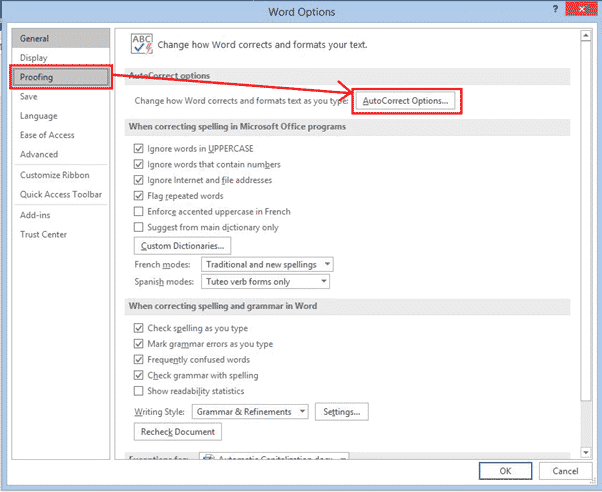 That will display a myriad of AutoCorrect options. We’ll focus on the change case and capitalization ones.

Typing a word with the first two letters in uppercase is easily done by holding down the Shift key a little too long. Perhaps more common with us ‘oldies’ who learned to type on a manual typewriter.

Word fixes that automatically with Correct Two Initial Capitals, it will leave the first letter uppercase and change the second letter to lowercase.

You can turn off any of these options permanently by unticking the relevant box, then clicking OK at the bottom of the dialog box.

I have decided that I don’t want the first letter of sentences to be automatically capitalized, so I have unticked that box:

For example, if you regularly type an acronym “ABCD”, but don’t want to have to hit the Shift key every time you type it, you can add an item to change “abcd” to “ABCD”

If you still want the default capitalization rules to apply in most instances, but you have specific instances in which you don’t want them to apply, you can set up your own exceptions to these rules.

Still in the AutoCorrect Options dialog, click the Exceptions button on the right-hand side.

Other words that you don’t want Word to change, no matter how you type it.

Thanks for joining us! You'll get a welcome message in a few moments.
Undoing Word's Automatic Capitalizations Emoji Panel is part of Windows 10 that totally sucks
View our latest eBooks!