3D coming to PowerPoint as part of new Microsoft push

Today’s big announcement from Microsoft was mostly about the future and the future is 3D.

A small part of that future is in PowerPoint.

The new major release of Windows 10 will be in 2017 and called the ‘Creators Update’.

It will have a lot of 3D enabled elements.  Microsoft Paint, that’s barely changed in decades will become 3D enabled. 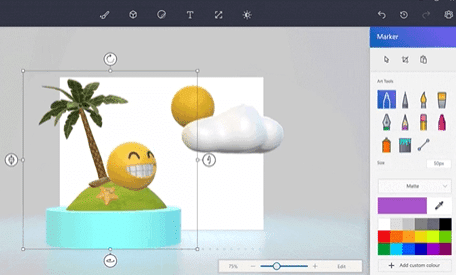 You’ll be able to make 3D models or, with promised software, take a series of photos then combine into a 3D rendering of the object.  A “Doodle Sketch” tool will try to convert 2D drawings into 3D.

PowerPoint will be able to display those 3D images in presentations.

Much of this, like the ‘photos to 3D’ app is yet to come, but you can go to https://remix3d.com/, login with your Microsoft account and see what’s available now.

Long-promised Virtual Reality might finally arrive.  VR headsets will be available from makers like Acer and Lenovo from US$299.

Also announced were new Surface notebooks and devices.  As in the past, Microsoft’s Surface offerings sometimes fall short, especially when it comes to disk space.  The prices are still extremely high – ignore the lower headline prices and see what a model with decent memory and disk space will cost you.   There’s better value for money elsewhere.

« Microsoft ‘s cloud expands profitability » What they did before PowerPoint