What does 'Microsoft Office Defense in Depth update' really mean?

There’s a series of August 2018 patches under the broad heading ‘Microsoft Office Defense in Depth update’ which seems to be obscure important changes in Outlook 2010 through 2016.

All that tells us nothing, ‘defense in depth’ sounds impressive but little else. 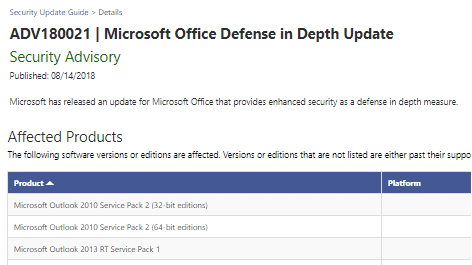 If you’re making a digitally signed, rights-protected, or encrypted email message, now you can’t add cloud files as attachments to the email.

The workaround is to make a copy of the cloud-stored file then email the copy.

What do those updates do or fix?

It depends.  In Outlook 2010 it only fixes this problem

Dynamics CRM functionality is blocked unless you enable all roaming folder homepages by using the EnableRoamingFolderHomepages registry key that is documented in the following article:

But in Outlook 2016 it covers that CRM issue plus a lot more problems, both security and non-security.  It also introduces a new phrase to the Microsoft dictionary:  cloudy attachments.

Thanks for joining us! You'll get a welcome message in a few moments.
Maybe you can't even trust Amazon when buying Microsoft Office August 2018 security fixes for Office and Windows