Windows 7 ending – what to do & the Office 365 extension option

Time is running out before the end of support for Windows 7.  Here’s what’s happening, what to do, what not to do and the way some Office 365 users can still use Win7 with Microsoft support.

Like all Microsoft software, Windows 7 is reaching the end of its extended support life.

After 14 January 2020, Windows 7 won’t get security patches for newly discovered viruses or bugs.

‘Mainstream’ support for Windows 7 ended back in 2015. Since then Microsoft has only been releasing security updates. These patches fix the seemingly never-ending list of security bugs in their products which can be exploited by criminals, government agencies and other hackers.

On 14 January 2020 even those security fixes will stop.

There are some exceptions. Windows 7 running with Office 365 ProPlus will continue to get security updates, see below.  Some other large organizations might contract with Microsoft to continue supplying security patches.

“Your Windows 7 PC is out of support”

If you haven’t seen it already, this is the full screen message on Windows 7 computers. 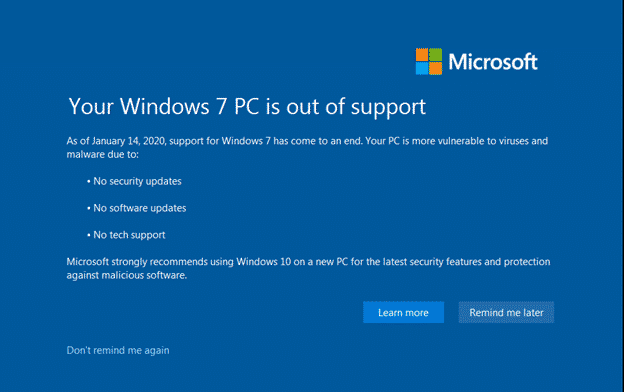 To remove the message, click on the less-prominent “Don’t remind me again” option at bottom left.

The operating system will keep working on all computers and virtual machines.

Don’t panic or rush to change from Windows 7.

The risk of virus infection from an unpatched bug is low but increases over time as the list of known and unfixed vulnerabilities grows.  Hackers will target these older and unpatched machines just like they already go for older versions of Microsoft Office.

We suggest moving from Windows 7 but when you and your budget is ready. Maybe sometime in the first half of 2020?

Some Windows 7 machines will still get security patches for three more years.

IT managers should know about this and take any necessary action.

Some very large organizations, even governments, might arrange a Custom Support Agreement with Microsoft to get a private supply of security patches.  Microsoft doesn’t like to talk about CSA’s but they are known to exist for very large customers.

Some Windows XP setups kept getting security patches for several years after its official support ended in 2014 because of a special agreement.  Some organizations have or will do a similar thing with Windows 7 because it costs less to pay for special patches than fully upgrade older equipment.  Custom Support Agreements aren’t available to most businesses, let alone individuals.

Why is Windows 7 still popular?

Windows 7 is still popular because it’s a stable operating system that runs on a wide range of hardware. By modern standards, Win7 needs relatively slow CPU, little memory and disk space.  It runs most Win10 compatible software.  You’ll find many virtual machines (Hyper/V and VMWare Workstation) using Windows 7 because of those compatibility advantages.

Windows 7 will work with Microsoft Office 2016 and earlier versions of Office.

Even the latest Office 365 for Windows works with Windows 7. Only Office 2019 for Windows is specifically Windows 10 only.

Windows 8 isn’t used much because Microsoft pushed the free updates to Windows 10.

What to do with Windows 7 machines?

For individuals, families and small businesses with Windows 7 machines, the important thing is not to rush into anything.  There’s time both before and after the deadline to make a considered choice.

There are many retailers and companies who are happy to use this deadline to sell either Windows 10 or a new computer.  They offer all manner of ‘help’ and ‘checklists’, all designed to boost sales.

Microsoft itself recommends Windows 10 (big surprise) with a new computer.

Overall, getting a replacement computer is the best option.  Not just to replace Windows 7 but also to the better speed and features on newer computers.  New computers have faster CPU, memory and notably hard drives (especially SSD).  Better external connections like USB 3 or USB C plus HDMI (to connect to a TV) are common now.

If you’re on a budget and know a bit about computers, a second-hand machine is a possibility. There are plenty of laptops and computers only 12-24 months old available, mostly from large organizations.  Watch the battery life, especially on laptops with sealed non-replaceable batteries.

Upgrading a computer for Windows 10

It might be possible to change the hardware on an existing Win7 computer so it works well with Windows 10.

Note, we’re talking about working well meaning fast and efficiently.  Almost any Windows 7 computer can run Windows 10, but it’ll run so slowly that it’ll be frustrating or useless.

Microsoft’s system requirements for Windows (and Office) are self-serving to make sales.  They are really ‘absolute minimum’ requirements.

Windows 10 for Microsoft Office users has a whole chapter (Hardware Choice / Compatibility) with our recommendations for realistically running a computer with Windows 10.  We explain our choices so you can make an informed choice.

Boosting memory might be enough to keep a computer going with Windows 10.  At the very least it’ll keep a computer running well for a little longer at relatively little cost.

We believe Windows 10 needs at least 4GB RAM, preferably 6GB or 8GB.  64-bit Windows is necessary for over 4GB RAM.  Modern software, especially browsers, use a lot of RAM.

Switching to a solid state (SSD) drive will greatly improve the performance of any computer.

Changing CPU (main processor) might be possible but the choice is usually limited because of socket compatibility.  Broadly speaking, if you’re thinking of upgrading CPU’s it’s probably time to get a whole new machine.

If you can get a legal licence for Windows 8/8.1, that’s an option to consider.

Windows 8 is mostly a good operating system, but it got a bad rap.  The major downside was the foolish full screen tile menu which Microsoft insisted upon. Turn off the tile menu (easy in Win8.1) and you have a perfectly good, stable operating system.

Among other things, it has File History, an important and automatic backup system.

Windows 8 isn’t sold new but second-hand copies might be available. Keep in mind that most Windows licences are OEM (Original Equipment Manufacturer) and locked to the computer it was sold with.

You do NOT need to upgrade Microsoft Office when changing from Windows 7.

All Office for Windows releases from Office 2007 onwards work with Windows 10. See Installing older Office on Windows 10.  If you switch from Windows 7 to Windows 10 or 8.1, reinstall your existing MS Office on the updated Windows.

Microsoft would like you to switch to Office 365 when moving from Windows 7 but there’s no need to do that.

Thanks for subscribing!
SSD's - some tips More Excel alternatives to nested IF statements
View our latest eBooks!