Readers asked us about Window 10 naming, version and builds after Overdue changes to Windows 10 available now.  Some told us we were wrong while others are confused, with both groups quoting various Microsoft sources for their ‘truth’.

The sad fact is Windows naming, version and builds are a confused and inconsistent mess.  Microsoft itself can’t keep it straight so customers have little hope doing so.

Windows 10 major updates have names like ‘Creators Edition’ ‘Anniversary Edition’ and more recently just month/year like the upcoming ‘May 2019 update’.

Microsoft refers to the product/update with that in press statements, blogs, presentations and other places EXCEPT in the product itself.  You won’t see any use of the public name in Windows 10 itself.  Only the build/version numbering.

Even when getting the major update, the naming is dropped in favor of a bland version number eg “Feature update to Windows 10, version 1903”.

Windows regulars are used to this but let’s pause for a moment to think how strange it really is:

You want to buy a car and decide to buy the Toyota Cortana [sic].  The Cortana is widely advertised on TV, Radio, print and online. In the dealership there’s big signs and glossy brochures all with the name ‘Toyota Cortana’. Even the receipt says you’ve bought the latest model ‘Cortana’.
But when you get the new car the name ‘Cortana’ is nowhere to be seen.  No logo or decal with that name. No name on the instrument panel or embossed into the upholstery.  Only after digging deep into the glovebox manual or bodywork will you find mentions of a ‘Toyota 10, 2019 H1 release”.

That’s what Microsoft does with their flagship Windows product. They sell it with one name but drop that name from the delivered product.

Why?  This has been happening since the first Windows 10 update so it’s deliberate marketing strategy not an omission or mistake.  Microsoft wants us to stop thinking about releases or versions completely.  Just that we use ‘Windows’ which is updated by Microsoft as the company sees fit.

After the disaster of the October 2019 update, Microsoft decided to do proper testing and act upon bug reports.  That’s a good thing and we hope it’ll continue (it won’t, but that’s another story).

In Windows 10 itself the various changes (large and small) are counted by a combination of Version and Build numbers.  This would be fine if Microsoft itself could keep this straight in their own software but, as we’ll see, they can’t.

Here’s how it’s supposed to work.  From Settings | System | About 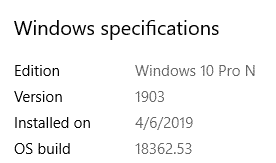 Edition:  the type of Windows you bought; Home, Pro, Enterprise

Version: the major update you have.  It’s a label rather than a true software update counter.  This is where a label like ‘May 2019 update’ should appear but doesn’t.

OS Build: the exact software release installed.  It’s the true counter of Windows updates.  The displayed value is incomplete and should be 10.0.18632.53   Windows 10, no sub-releases then a counter for each build made and tested by Microsoft.

Close trackers of Windows versions follow the Build number not the Version.  They know that, for example, Build 10.0.17763 was the first public release of Windows 10 October 2018 update aka Redstone 5 aka version 1809.

All the above would be OK if Microsoft could be consistent with the build and version information in their own product.

The Microsoft System Information app should be a reliable source of information but it’s not.

The ‘Version’ is actually the build number. Even that’s incomplete because it lacks the sometimes important decimal detail (e.g. .53 ) shown in the About box above.

Worse, it shows a ‘Build’ value that has no relation to the build label used elsewhere by Microsoft. This ‘Build’ is just a partial of the ‘Version’ given on the same line.

If you thought that was bad …

The About box shows the same info as the Windows Settings | About, not the distorted details elsewhere in the System Information program.

Finally, sometimes people mix up the names ‘Build’ and ‘Version’ making the two seem interchangeable.  Microsoft staff sometimes use the wrong name, others do too and likely Office-Watch.com itself has fallen into the same trap.

Thanks for joining us! You'll get a welcome message in a few moments.
Changing Caption appearance in Word or hiding captions completely What a shame. Windows Sets is dead