We’re happy to release a new version of our Subscriptions Manager that’s compatible with Excel 2007-2016.

Subscriptions Manager is a way to list and manage the many online plans we sign up for; HBO, Netflix, Amazon, Spotify and so many more. You can track who pays (in a family) and payment method (card, direct debit etc).

The original Subscriptions Manager uses some functions and features only available in Office 365/2019 for Windows or Mac.  This version drops those features to make it compatible with Excel 2007-2016 for Windows, Excel 2011-2016 for Mac plus (perhaps) non-Microsoft spreadsheet software. 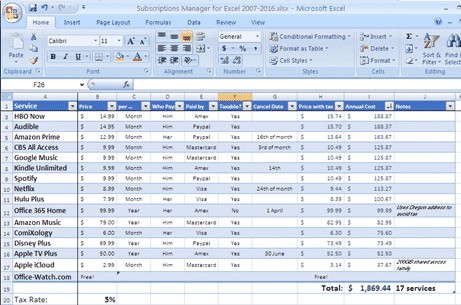 Details on Subscriptions Manager  and getting started.

There are a few differences:

Annual Cost is calculated with VLOOKUP() to a table on the Notes tab.  Instead of IFS() in the Excel 365/2019 version.

This converts the ‘per …’ payment period into a number of payments for the year.  We’ve expanded the list to cover more possibilities.

Some readers seem to prefer emptying existing rows rather than deleting the row.  To handle that we’ve made a few changes.

The number of services (bottom right) is now calculated with CountA() which counts the number of non-blank cells. And it now counts the first ‘Service’ column.

The Tax Rate field has been moved below the main table.

The download is available free to all Office Watch and Office for Mere Mortals subscribers (also free).

The Exclusive Downloads page link is in every issue of both email newsletters.

Starting with the Excel Subscriptions Manager

More about the Excel Subscriptions Manager