For a long time people have asked for a way to edit PDF files – Word 2013 has it, sort of.

It’s an understandable feature request even though it’s a bit like asking to edit a paper book or a stained glass window – neither format is designed to be changed. PDF files are intended to be finished products to be read, not changed.

Microsoft has made Word 2013 look like its editing PDF files though it’s really just streamlining the import and conversion process. That’s not a criticism but it helps to understand what’s happening when using this feature.

Any ‘open’ PDF file (that is one that permits changes or extraction of data) can be opened in Word 2013 via the File | Open dialog or ‘drag and drop’ just like any other document. You’ll be prompted for a password if required. Opening the PDF can take a little time, depending on the complexity of the document.

Keep in mind that, behind the scenes, Word 2013 is actually extracting and converting the PDF content into an editable form. That means the original formatting of the document may not always be retained in the Word 2013 version. As usual, the more complex the PDF file, the more likely there’ll be formatting variations.

In addition, Word 2013 can only convert to editable text content that’s available as embedded text in the PDF. Not all things that appear as text in a PDF are actually stored with a ‘plain text’ version as well. If the PDF has an image (even if that image is of a page full of text) then Word can only display that image.

At first, Word will open the PDF in reading view 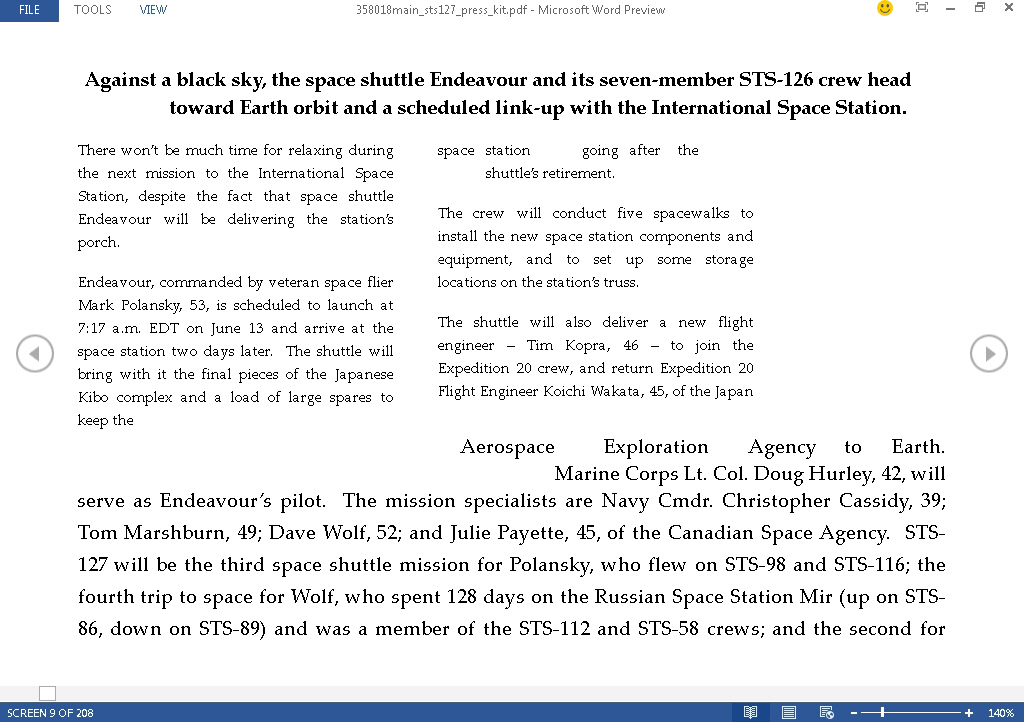 As you can see, the formatting is a little awry since Word 2013 has had trouble with the columns and justification. But the text is all there, because it was saved in the PDF in a machine readable form.

You can try this document for yourself – it’s from the NASA web site as the press kit for shuttle mission STS-127. 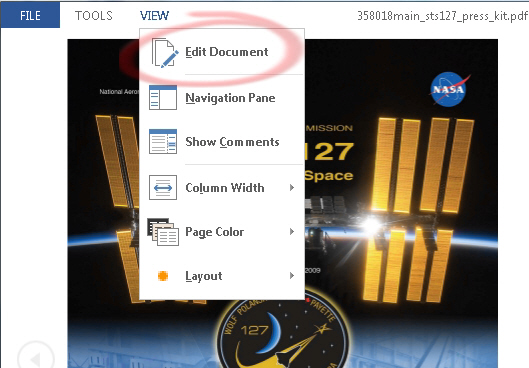 Then the document opens up in Word 2013 as a standard document.

Since the PDF based on a Word document, Word has done a decent job of conversion with headers, footers etc. That might not always be the case.

The title bar shows the name of the PDF file but you’re really working on a converted version of that file, stored by Word 2013 as a temporary docx file. Office does the same thing for any ‘foreign’ format you open.

That becomes clear when you try to save the edited PDF back to the original PDF – you can’t! Word 2013 will present a Save As dialog box defaulting to a docx format.

Note that the ‘author’ from the original PDF is retained when you save the document.

You can change the ‘Save As’ type to PDF but you can’t save it over the original PDF. Word 2013 considers that an open / read-only document which isn’t accessible.

That’s a wise precaution by Microsoft. If you open and make an editable version of a PDF the first thing you should do is save it as an editable document format like docx. Once you’re finished editing you can Save As to PDF again.