Can you believe it?  Clippy, the unloved spawn of Office 97 is returning.

Eros Fratini is a developer with, presumably, a perverse sense of humor. He’s created a Visual Studio add in which lets developers make Clippy part of their projects.  Get it from GitHub. 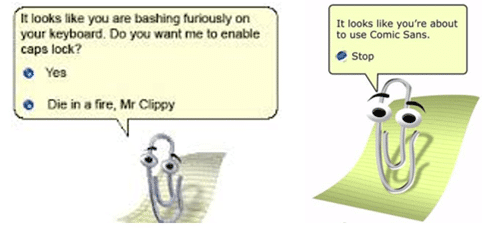 Oh joy, we can hardly wait.

According to Microsoft’s revisionist history, there was nothing wrong with Clippy.  In Redmond’s alternate universe, Clippy was “ahead of it’s time” which is Microsoft speak for ‘the customers didn’t understand’.

Clippy looked cute in demonstrations but the novelty wore off quickly.  It’s ability to detect what people were doing was poor.

That and other problems were trivial compared to Clippy’s major bug, you could not turn the damn thing off!

However Clippy VS is deployed, let’s hope the disable features work properly.

Thanks for joining us! You'll get a welcome message in a few moments.
Festival / Conference planning with Outlook Changes to Office for Mac - get ready now