Where is Excel’s missing ‘New’ Feature?

It was a small but long awaited addition to Excel for Windows but now it’s disappeared?  Why did the Chart option “Show #N/A as an empty cell” go missing?

There was a small cheer in the Excel charting community when Microsoft put this extra option in the Chart | Hidden and Empty Cell Settings: 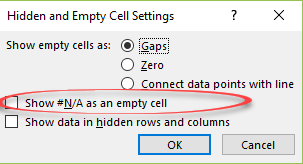 ‘Show #N/A as an empty cell’ stopped cells with #N/A results from messing up a perfectly good chart.

The feature seems to have disappeared from both Insiders releases and the latest public versions too.

No matter where we look, the option is gone, AWOL, disappeared, missing, gone to meet the choir invisible etc.

Not everyone at Microsoft got the memo

The references to the extra Chart feature have been removed from the Office 2016 for Windows (Office 365)  What’s New pages. No explanation, let alone an apology.

But not everyone at Redmond got the memo.  This page about Empty and Hidden cells in Excel charts still references the dropped feature.

We can even show you the Microsoft video for this non-existent feature.

It would be too much to expect Microsoft to treat their customers like adults.  Explaining that the feature had to be dropped would save customers time and angst trying to figure out why an option isn’t there.

Alas, Microsoft only thinks of its own corporate ego.  It’s more important to show no mistake than consider the a customer’s needs and tolerance for honest mistakes.