Why no Windows Live Tiles with Outlook?

Why are there no Windows 10 Live Tiles that work with Microsoft Outlook? Why doesn’t Windows ‘play nice’ with Outlook, when they are made by the same company?

Live Tiles are those animated blocks on the Start Menu which, in theory, can display latest messages, contacts and calendar items.

The Start Menu also acts as an advertising billboard for Microsoft products.

Windows 10 Creators for Microsoft Office users has a chapter devoted to customizing the Start Menu to make it work for you, not Microsoft marketing.

You can’t connect your Outlook appointments, calendar or mail to the appropriate Live Tiles.

The lack of integration goes beyond Live Tiles, Windows 10 is getting ‘People’ a newer way to display contacts within Windows.  Does it directly link to Outlook for Windows? … don’t be silly. 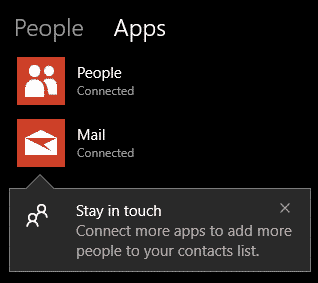 There’s a workaround, if you use a cloud hosted service like Office 365 mail hosting, Exchange Server, Outlook.com, Gmail etc.

Put simply, get Windows to do the same job as Outlook.   Open up the Calendar, Contacts or Mail app and ‘Add account’.  Link to the same cloud provider that Outlook uses.

It’s wasteful because you have the same data being downloaded and save twice. Once by Outlook and again by the Windows apps.

It’s not just Live Tiles, there are other parts of Windows 10 that can’t ‘see’ Outlook.  For example, if you try to Share a photo from the Photos app.  Outlook isn’t an option to send an email, only the Win10 Mail app.

There’s the reverse problem too, try to email a Word document and there’s no choice for the Windows 10 Mail app.

Two Windows in one

Windows 10 isn’t one operating system, it’s two systems living uncomfortably together.  You can see this if you’ve installed both Office for Windows and the Office Mobile apps on the same computer.

There’s Traditional or Desktop Windows which runs most of the programs you’re familiar with.  That includes Office for Windows.

‘Apps’ run on Windows 10 but in a totally separate sub-system.  Because they live in this ‘sandbox’, the apps can’t interact with traditional Windows programs.

Windows Apps, whatever they are called

Whatever you call them, Windows Apps should be able to run on all Windows devices.  The same app running on a smartphone, tablet, laptop or desktop computer.  Word, Excel, OneNote and PowerPoint mobile apps all do that.

Microsoft has been pushing their apps system with little success.  While the Apps might have benefits for Microsoft, they’ve not gained a lot of interest from customers.

The apps available are generally lame and lacking in features compared to their desktop counterparts.  That might change with the ‘Desktop Bridge‘ system which allows traditional Windows programs to run in the App system.  That’s what ‘Office in the Windows Store’ really is.

Microsoft’s desperation to get customers using apps is simple; money.

Redmond is very jealous of Apple and Google with their app stores.  When you buy an app for your iOS or Android device, Apple or Google get a generous cut of the money you pay.  Meantime, we all buy Windows programs directly from the makers without Microsoft getting a cut.

Integration between Outlook for Windows and Live Tiles is unlikely.

Microsoft expects customers to wait until Outlook for Windows becomes a set of UWP apps.  Sometime after that major change, we might see proper integration with Windows 10.  Until then, you’re stuck with whatever Microsoft condescends to give paying customers and their usual platitudes about ‘listening’ to customer feedback.

« Is Word too complex for us mere humans? » MS Paint, take a deep breath and relax