Is Word too complex for us mere humans?

“Word Processing is Dead” makes for a snappy op-ed headline but it doesn’t tell the whole story.

The Australian Financial Review has tales of Word woe from the legal community.  Badly formatted contracts, especially inconsistent numbering, is the bane of many organizations.

“…work was done by dedicated operators with expert training. But this is 2017, and it’s par for the course for lawyers to work directly on contracts, for BDMs to edit sales agreements and general admin staff to create reports.”

That’s right.  Back in the dark ages (ie 1990’s) there were ‘typing pools’ or a least ‘typing puddles’.  Small groups of experts in making professional looking documents.  Staff could speak, sometimes barely understandably, into a Dictaphone.  In return, crisp and beautifully formatted documents would magically arrive a few hours later.

These days it’s more ‘do it yourself’ with staff working on their own documents.  That’s great in many cases, for small changes etc.  But a problem when word-processing complexities arise.

Word has features which can help with all these problems but first, some broad suggestions about Training and Templates and Track Changes.  Also some humble proposals for improvements in Word itself.

Rather than blaming Microsoft Word, the solution is better training.  Most new hires are assumed to ‘know’ Word.  People are not born with a detailed knowledge of Microsoft Office, even if they’ve grown up with it.

Knowing the basics of Word, Excel and Outlook is a far cry from understanding the details of multi-level numbering, templates, styles, complex formulas or even email.

Word templates are important but they aren’t used often enough.

There’s usually templates for letters etc. but surprisingly not for complex documents with specialized numbering requirements.  That’s probably because those templates are time-consuming and hard to get right.  It’s time and effort well spent even if the end result isn’t appreciated by the people using it.

Even ‘informal’ templates are better than starting from scratch.  Ask around for a Word document that’s like the formatting you need (styles, numbering etc.).  Make a copy of that sample, remove all the unnecessary content, keeping just the formatting and text.

Office-Watch.com is sometimes asked for help with strict formatting requirements for courts, tribunals, universities or even specific lecturers.  Invariably, the user is trying to make their own document styles. Also invariably, they’ve not asked around to find someone who has made the right Word document already.

Templates aren’t enough, people need to understand them.  Too many times, Word users get confused when a document changes formatting for no apparent reason (the shared template has changed) or why the formatting doesn’t change.

The confusion lies between styles saved in the document, styles in the linked template and Automatically updated styles.  These choices are on the Modify Style dialogs but often ignored.

Track Changes is a fantastic part of Office that’s not used enough. It’s sold as a collaboration tool but it’s useful for just one person working on a document.

Track Changes can highlight changes made in a document and who made the change.  That’s handy if you’re trying to identify bad changes in numbering etc.   Think of it as like ‘Undo’ but with a longer memory.

One missing part of track changes, filtering by date as in ‘show all changes made between 12 July and 17 July’.  That would display all the changes made after a ‘known good’ version existed and help identify where some bad formatting or changes were made.

The easily identified and fixed cross-references are the ones that show an error eg. REF NOT FOUND .  You either remove or replace the cross-reference with the right one.

The big worry is a working cross-reference which shows the wrong text, page number or link. Problems usually arise with hidden bookmarks that have been deleted or expanded to cover more content than intended.

Use Alt + F9 to reveal field codes, especially if a Find/Replace is needed to fix many REF errors.

There are tools in Word to find variations from styles like specific character formatting like “random spacing between paragraphs, inconsistent margins and fluctuating font sizes”

Use the Style Inspector or Reveal Formatting to show any variations from the document styles.

Track Changes can also show changes made in a document. Changes in Formatting can be displayed with other changes hidden. 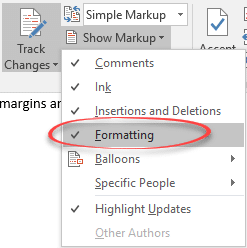 Microsoft could help by adding a View option to highlight variations from paragraph or character styles.

Thanks for joining us! You'll get a welcome message in a few moments.
Word 2016: how to check for missed numbering or levels Why no Windows Live Tiles with Outlook?
View our latest eBooks!