New and improved ‘Pro’ fonts are a lesser known part of the April 2018 update to Windows 10.

Windows 10 now supports ‘Variable Type’ fonts where a single font file contains many variations like bold, italic, regular, condensed etc.  In the past each variation was its own font file.  Surprisingly this innovation is NOT used in these ‘Pro’ versions of existing fonts.  (Thanks to John H, among others, for pointing that out).

The main purpose of these fonts is to introduce the sale of fonts via the Microsoft Store.  There are a few fonts now for sale, expect more in the future.

These fonts are additions to the existing fonts – not replacements.  Most are ‘new’ to Windows 10 as free fonts but have been sold online for sometime.

Readers of Windows 10 April 2018 for Microsoft Office users may be getting a little ‘déjà vu’ reading this.  The ‘Fonts’ chapter already has a comprehensive look at all the new fonts, what they look like and how to install them.

Here’s just one of the new fonts, Georgia Pro.  It adds 20 new variations / font faces alongside the existing Georgia font which has only four. 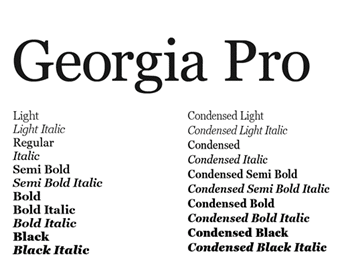 The other Pro fonts are Arial Nova, Gill Sans Nova, Rockwell Nova and Verdana Pro.  ‘Nina’ is a condensed version of Verdana.  ‘Convection’ will be familiar to Xbox users.

To see these fonts in Word, Excel or PowerPoint you need to restart the program. Not Windows, just the Office program. 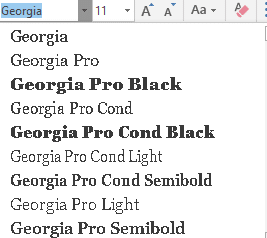 That should NOT be necessary.  Modern Office is supposed to show newly installed fonts automatically after installation.  For some reason that’s not happening with these new fonts though fonts installed the usual way do appear in Office programs without a restart.

How to get the new Windows 10 fonts

Maybe the Office display issue is because of the new way these fonts are delivered?

The fonts aren’t installed with the April 2018 update, you get them from the Microsoft Store.  Search for ‘fonts’ and you’ll be taken to the new Fonts section of the store. 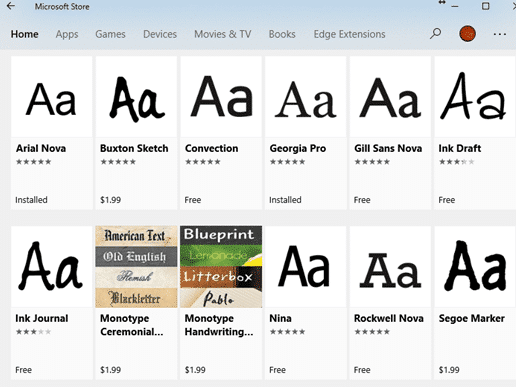 Or search for a specific font by name.

There are some paid fonts, but most are free. Microsoft put them in the Fonts store, presumably to kick-off the new Store option which has paid fonts as well.

Choose the font you want, check the price ‘Free’, and click Get. 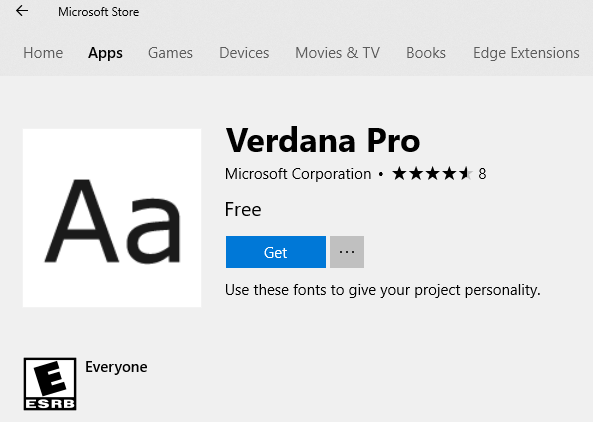 Aside from the new way to get and install the fonts, they work just like other fonts.

Like too many things in Windows 10, the configuration is split between the older Control Panel and the new style Settings.

The Control Panel | Fonts display does NOT show the fonts installed via the Microsoft Store.  We’re not sure why but it might explain why Microsoft Office isn’t detecting newly installed fonts immediately and the programs require a restart.

If you want to see the details of the Microsoft Store fonts, use the new ‘modern’ Settings | Fonts page.