Do you hate Skype software? Here's the alternative!

Microsoft has released a browser based version of Skype. It’s great news but maybe not for the reasons Redmond expects.  Skype on the Web is an alternative to the bloated and annoying Skype for Windows or Mac.

What is Skype for Web?

It’s Skype with most of its standard features running on a web page.  Computer to computer calls, calls to regular phones, SMS text and instant messaging  (not secure and best avoided see Beating Bots, Spies and Cockups ). All from a web page without installing software.

Use Skype for Web on public or shared terminals instead of relying on pre-installed Skype software.

Until now, using Skype required installing a program or app.  The Skype app for Windows 10 hasn’t worked very well.  Skype desktop program for Windows is bloated and annoying. Updating Skype for Windows happens too often and intrusive compared to Windows or Office updates.

Anyone frustrated with Skype software for Windows can uninstall it and just use Skype for Web instead.

Office 365 Home/Personal/University includes 60 minutes of calls to many global numbers as part of the plan.  Office 365 customers should setup Skype with the included calls, even if it’s just a backup for unforeseen situations.

All you need is an Internet connection and a compatible browser. Microsoft Edge or Google Chrome browsers are supported on Windows 10 or Mac OSX 10.12.

Skype on the Web doesn’t work on Linux or Chromebook OS, a shortcoming that Microsoft will hopefully fix.  There’s little chance Skype for Web will be extended to Windows 8 and 7 with Chrome because that’s not in Microsoft’s wider interests.

We discovered there’s a bit more to the setup than Microsoft lets on.  Getting Skype to Web working needs a few, as yet undocumented, steps.

If your ISP or country doesn’t like Skype, you’ll still need a VPN service to bypass that block.

Go to https://web.skype.com/ and login with your Microsoft account.  On web page are all the main Skype features and settings.


If you’ve used Skype before, Skype for Web should be familiar.  The interface is similar to Skype for Windows/Mac.

Skype for Web needs a little configuration.  Strictly speaking, browser configuration to allow Skype to do certain things not normally permitted to a web page. Annoying but for your privacy.

The browser will show a notice asking if the site can display notifications.  Many sites (too many) ask for this and the usual response is NO.  Skype for Web uses notifications to warn of incoming calls or texts, so you probably want to allow them.

Microphone and Camera permission must also be given and configured.  Go to Settings (three dots next to your name at top left) then Audio and Video. 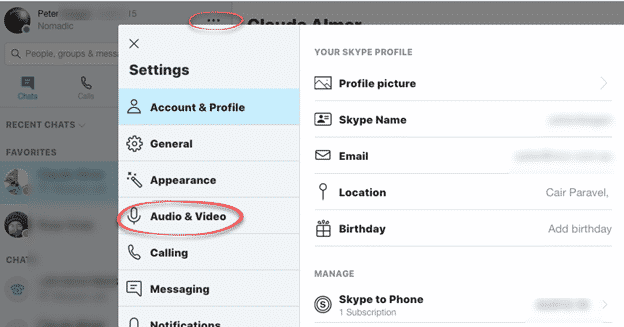 The browser will pop up permission requests for both microphone and camera.

Then you can configure/test both audio and video in Skype for Web.

Click on the dialpad icon to make a phone call to a new number.

This also shows your account status.  In this case the ‘subscription’ is the Office 365 hour of calls, plus some money in the Skype account to pay for calls beyond the scope of the ‘free’ hour.

Text messaging / SMS is also available from that window.

Overall, Skype for Web is good. It has more features and settings than we expected.  While Microsoft hasn’t said anything, it’s likely that Skype software will be gradually set aside in favor of a Skype for Web.  The web service is better for customers and a lot less costly for Microsoft to develop.

Thanks for joining us! You'll get a welcome message in a few moments.
Automatic worksheet/tabs list in Excel New Office icons start appearing ... yawn