The Microsoft Bluetooth Keyboard is one of two new models with dedicated Office key and Emoji key. What’s this new keyboard like … aside from those innovations?

We bought a Microsoft Bluetooth Keyboard with our own money and gave it a long hard look.

The documentation with the keyboard is lacking, though a little improved in recent days. We spent some time trying keyboard options to discover what Microsoft has made possible but hides from paying customers.

We had to return the first keyboard because of Bluetooth connection problems. The exchange was done with little fuss however the staffer tried to blame other factors (older Windows 10, conflict with other devices etc).  They seem trained to deflect blame from Microsoft, regardless of the situation or facts.

See our separate reviews of the dedicated Office key and Emoji key.

The Office and Emoji keys are on the right of the spacebar between the Alt and Ctrl buttons. 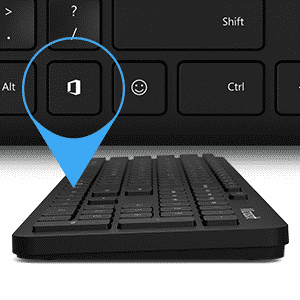 Emoji or Expressive Input key is also on the right.

The Office and Emoji keys are getting all the attention because they are new but there are other special keys across the top row.  Some are common and hopefully obvious (volume and play) but not all of them are documented or even mentioned in the accompanying software.

Further to the right (F8 and higher) are more unusual and mostly undocumented.

Task View: same as the Task View / Timeline button on the taskbar, though it uses a different icon.

Lock: locks Win10, login is needed to access the machine.

There is NO Printscreen key, presumably the Snipping key is meant to replace it.

No camera on/off key, though a physical lens cover is more reliable.

The keyboard is NOT backlit.

To access the regular Function keys, hold down the Fn key first then one of the special keys shown above.. Curiously, the Windows 10 setting to use standard Function keys instead of special functions does NOT work (Control Panel | Keyboard)

The Microsoft Bluetooth Keyboard is powered by two AAA batteries (supplied).  Microsoft says a pair of batteries will last two years … ask us again in 2021.

There is no On/Off switch.  Next to the battery area is the Bluetooth connection button and indicator light.

As the name says, it’s a Bluetooth keyboard which should connect with most devices, not just Windows or Win10 computers.  Though Windows 10 machines enable some parts of Microsoft keyboards not available on non-Windows devices.

The first model we tried connected using Microsoft’s Swift Pair feature, that promises a faster connection between supported Microsoft accessories and Windows.  But that didn’t help much.

Sadly the connection (via Swift Pair or standard Bluetooth) didn’t work properly.  The devices paired and connected but almost immediately disconnected. The connection light on the back of the keyboard didn’t flash in the patterns described in the documentation.  So we returned to the Microsoft Store for a replacement which worked.

The replacement keyboard connected properly, albeit with some initial troubles.  It’s not the smooth or ‘Swift Pair’ experience that Microsoft boasts about. In fact, the second keyboard didn’t seem to have Swift Pair at all.  After a few tries, the standard Bluetooth connection works fine. The standard Bluetooth connection worked fine with a little perseverance typical of any initial BT connection.

The keyboard goes into Pairing mode when first started.  Otherwise press the connection button on the back.  Select the Microsoft Bluetooth Keyboard from the list of found devices.  Type the displayed security code on the keyboard then press Enter.

The keyboard can connect to any device supporting Bluetooth 4.0-4.2.  That means Mac computers, iPhone, iPad, Chromebook.

Naturally, the Office, Emoji, Windows and other special keys have no effect on those non-Win10 machines.

All the usual keyboard controls in Windows apply such as Settings | Typing | scroll down to Hardware keyboard.

There are some extra options in the Microsoft Mouse and Keyboard Center.  That’s a separate free download that works only with Microsoft keyboards and mice.

Most of the special function keys (Connect, Task View etc) are not explained at all.

Microsoft Bluetooth Keyboard is a nice accessory with a soft feel on the chiclet style keys.  The case is plastic but feels solid. It’s a standard large format keyboard with number pad.  The Enter key is relatively small which is an issue for some typists.  The whole thing appears well-built and should last some time.

There are no ‘feet’ to tilt the keyboard up at the back.  Without the extra back lift, the keyboard seems to tilt away from the user which is a little disconcerting.

Keyboard preferences are a matter of taste and what you’re accustomed to. It’s mostly down to your typing style and comfort. That’s why it’s a shame that Microsoft Store’s don’t often (ever?) make their keyboards available to try.  They’d probably sell more of their nicely built keyboards if people could try them first.

Once a first connection happens, the keyboard reconnects smoothly to any paired Bluetooth device.

The Emoji key is especially underdeveloped with only one unique use and that’s to the woeful Emoji Panel in Windows 10 (which already has a simple shortcut, Win + .  , available on any keyboard).

The Office and Emoji keys should have better documentation.  Customers should not be expected to puzzle over top key icons trying to guess what they do.  The Microsoft Mouse and Keyboard Center is noticeably lacking in this area.

In short, the Microsoft Bluetooth Keyboard is OK and worth a look. The shortcoming of this keyboard is the software and documentation. Neither the Office key  nor Emoji keys have proper Windows or Office support, let alone any user configurable options.   Understanding all the special keys isn’t easy or direct.

Available at the Microsoft Store – physical or online.  Should become available at other retailers over time.

Thanks for joining us! You'll get a welcome message in a few moments.
Get VMWare Workstation working again on Windows 10 A different type of Office 365 phishing scam – by voicemail