The future of OneNote involves more connections to other services like Teams, Tasks and Todo.  New features made possible by a big effort to bring OneNote code back to a single base.

OneNote 2016 for Windows will rejoin the Office 365 suite from early 2020.  It will become part of the default install for Office 365 users.  Administrators will have options to allow or block OneNote from their in-house users.

Before then, OneNote Sticky Notes can appear in Outlook.

Microsoft is doing something unusual but very welcome with OneNote.

They are merging the modern app code back into the OneNote 2016 for Windows (Win32) code to make a single codebase for OneNote. Here’s the heavily edited schedule for that. 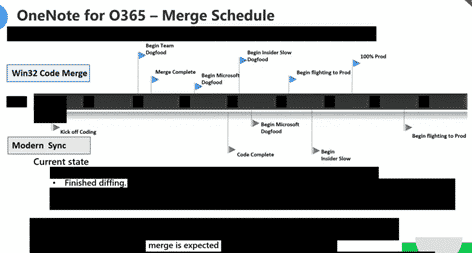 Microsoft is doing that code merge to make a single development base for adding more into OneNote.  Taking the best from OneNote 2016 combined with technologies in the Windows 10 modern apps.

Those new features include:

All the talk of merging codebases and deploying OneNote 2016 with Office 365 is great but there’s a mixed message from Microsoft.

The company is firm that they are ‘fully committed’ to the OneNote app for Windows 10. If that’s the case, why merge code from the modern app back into the ‘legacy’ Win32 base and not the other way around?

Word, Excel and PowerPoint apps for Windows 10 are now sidelined in favour of the traditional Windows programs.  It seems OneNote is moving in the same direction.

Thanks for subscribing!
Amazon’s fake problems are bigger than just Microsoft Office Protect against the latest ransomware attack via Excel
View our latest eBooks!