PowerPoint 365 is now able to create animated GIF’s from presentations.  It’s a little limited but the basics are there, and we’ll explain how to get even more from ‘Export to Animated GIF’.

Animated GIF’s have long been wanted in PowerPoint.  They make simple animations or mini-videos which are widely compatible with web pages and some emails.

We’ve made this Animated GIF from the slides for 2001 A Space Odyssey – in Word and PowerPoint it includes some images and slide animations.

The Animated GIF export will include animations, images and videos from the deck (no audio).  However, some images and definitely video will make the GIF very large.

Animated GIF’s are not fully compatible for viewing in Microsoft Office. They don’t show movement in Office documents or in Outlook.

There are four choices for the file size, resolution and frame rate.

The resolution is a ‘p’ value for progressive scan. The number is the vertical (height) of the video.


For most web pages and emails, either Medium or Small is enough.  Our ‘2001 inspired’ example was made with Medium but then optimised separately to reduce the file size.

Seconds spent on each slide

Sets how long to pause on each slide, if there’s no delay already set on the slide.

Any timing or animation greater than the ‘seconds set on each slide’ is used in the animated GIF.

If the timing/animation is less than the setting, the slide will still pause for the total timing set for Animated GIF.

Transitions between slides do NOT count towards the ‘Seconds spent on each slide’.

Export to Animated GIF is only available for an entire presentation, not a single slide or selection of slides.  But there are ways around that.

Hidden slides are NOT included in the exported GIF. Just hide unwanted slides, leaving just a few or only one to export.

Most likely you’ll want to tweak the presentation and timings for the Animated GIF.  Best to clone the PPTX to a separate presentation, make any changes you like and export from there.

The GIF animation is set to continuous looping.  There’s no way to change that from PowerPoint

There are many animated GIF editors available.  We don’t GIF’s often, so we turn to https://ezgif.com/ an online tool.  It has some simple tools to improve or tweak any animated GIF.

Optimizer will reduce the file size of an animated GIF.  We use ‘Lossy GIF’ optimization with a very low ‘30’ compression level.  That can halve the file size with little or no noticeable change in quality. 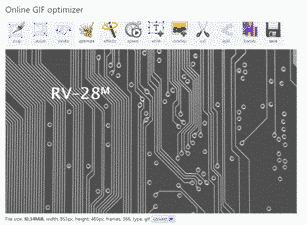 Frames lets you see each frame with the delay setting for each and also change the looping from continuous to a specific number of passes.

Thanks for joining us! You'll get a welcome message in a few moments.
Microsoft backtracks on forcing Bing into Office 365 Excel convert Range to Array in VBA