2001 A Space Odyssey - in Word and PowerPoint

It’s the 50th anniversary of Kubrick and Clarke’s amazing 2001: A Space Odyssey. As long time space and SF nerds we can’t resist putting the look of 2001 into Word documents and PowerPoint slides.

We’ll show you how to make a ‘close match’ using just the fonts and features in Microsoft Office.  We’ll also explain the details behind that choice and some alternatives, both free and paid.

Most films have a consistent typographical look but not ‘2001’.  One of minor unusual elements in the movie is the different typefaces used.

We’ve done things like this before for Star Wars and Thunderbirds.  Also in Formatting Magic with Word.

These examples show how the power of Office can be expanded beyond the standard looks, fonts and themes.  Too many documents and presentations look the same because everyone has the same options on the ribbon.

The main title and Intermission uses the Gill Sans font with an interesting variation.

The zero’s are actually the capital letter 0 not the zero.

Gill Sans is available in Office for Windows as Gill Sans MT.  It’s not a precise match (the original font has thinner strokes) so a ‘Light’ version of Gill Sans would be better.

See  2001: A Space Odyssey and font kerning for a closer look at the movie title.

Our version using Gill Sans MT plus the famous ‘Earthrise‘ photo by Bill Anders on Apollo 8.  A PowerPoint slide.

The original Gill Sans can be purchased and added to Windows/Office.

Google Fonts has the Lato font.  Lato Light is a closer match to the thinner movie titles.

The Dawn of Man

Adobe’s Albertus MT Std is a decent match for the movie title.

There’s no good match for Albertus in Windows/Office.

The closest free font we could find was Albertus Medium at Wfonts.com. As with the main title font, a thinner ‘light’ version would be better.

Perhaps the only joke in the whole movie is Dr Floyd (William Sylvester) struggling to read the long instructions for using the Zero-G facilities. 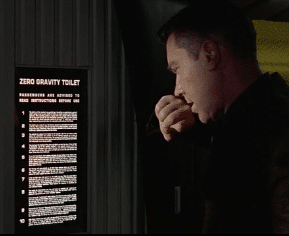 The entire text is Eurostile Bold or perhaps Microgramma.

Eurostile isn’t available with modern Windows or Office but it was part of Office 97 and other MS products around that time.  If you have some old install disks around, dig one out then grab Eurosti.TTF and eurostib.ttf .

To get the fuzzy backlit effect, try the WordArt, Glow options.  We found a close-ish match using a slight off-white, 11pt and 52% transparency.

The glow effect isn’t ideal and we can’t help feeling there’s an Office setting that’s better. Please let us know if you figure out a better way.

Now the fun bit, at least for me.  Recreating the famous HAL computer status screens.

The font is Eurostile Bold Extended which we found for download here.

The spacing is a combination of Expanded spacing 3pt and two space characters between each letter.

To our inexperienced eye, it looks like a lighter version of Eurostile.  We (reluctantly) settled for Eurostile Condensed with character Expanded 1pt.  To make the text seem lighter, the font color is Light Gray 10% instead of White. 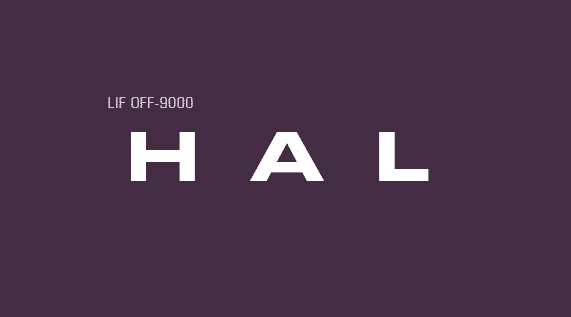 “This article has been over a decade in the making.  I found a draft of this piece from the early ‘oughts which was hampered by a lack of information and font identification tools.  I’m obliged to various forums and articles, especially TypeSetintheFuture.com.

There’s many books about 2001: A Space Odyssey but a recent release is especially good.  Space Odyssey: Stanley Kubrick, Arthur C. Clarke, and the Making of a Masterpiece by Michael Benson is very readable and full of fascinating personal insights into Kubrick himself and the amazing team around him.  Plenty of nerdy trivia like what the ‘eye’ of HAL was made from, why Kubrick occasionally borrowed it and how they filmed the HAL ‘point of view’ shots.”

New US Law opens up Microsoft's data anywhere to the US government 2001 movie design: using in Office, Word or PowerPoint
View our latest eBooks!