Microsoft Office can read aloud, talk or speak the text of documents to you. It’s possible in Word, Excel, PowerPoint, Outlook and OneNote.

Computer speaking text is mainly suggested for various disabled users under the ‘Accessibility’ name.   But ‘Speak’ is also useful if you’re just tired of reading the screen or are proof-reading from another document.

Officially it’s called TTS ‘text-to-speech’ and is part of Windows.  Office makes use of that Windows sub-system.  Configuration of the Speak/Read feature is done in Windows, as we’ll see below.

Word 365 and Word 2019 for Windows has two similar features:

Office for Mac has a Read/Speak option. Rather, the macOS has a speech feature which can be used in Office.   See Make Office for Mac speak.

Converting what you say into text is also possible in Office – see the new Dictate add-in for Office 2013 and Office 2016.

Let’s look at ‘Speak’ first since it’s been in Word for some time. It’s also the same basis as ‘Read Aloud’.

You’ll find Speak on the ‘Commands not on the Ribbon’ list.  The easiest choice is adding it to the Quick Access Toolbar.

Now it’s on the QAT, select some text and click the Speak button.

A somewhat mechanical voice will talk to you.

If there’s no selection, Speak will say the current word at the cursor.

The controls for Speak or Read Aloud are in Windows | Control Panel | Speech Recognition | Text to Speech. 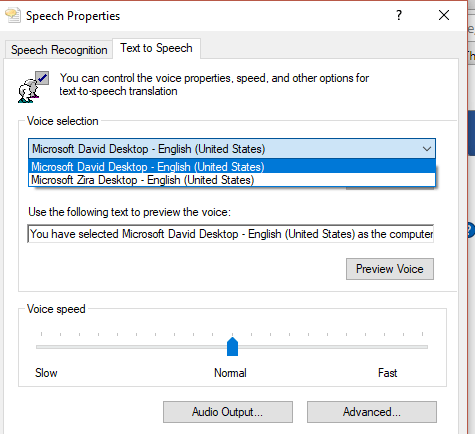 Voice Selection – the English language options are ‘David’ or ‘Zira’ – male or female.

Voice speed – faster or slower than the Normal setting.

Read Aloud is much the same as Speak.  It’s the same voice selection and settings in Windows.


What’s different aside from the name and a fresh round of Microsoft hype?

‘Read Aloud’ is promoted to the Review tab.

If it’s not there, add it to the Quick Access Toolbar, as shown for ‘Speak’ above.

Click on Read Aloud and Windows/Word will start speaking the text from the cursor onwards.

New in Read Aloud is a little control panel on the top right of the document window.

Back – jumps back to the start of the current  or previous paragraph.

Settings – change the reading speed and voice without switching to Windows.

We can’t find a keyboard shortcut to pause / play the talk. That seems like an obvious, if not essential, part of the feature.

In Read Mode, Read Aloud is available from the bottom of the View menu.

Text to Speech is also available in other parts of Word 2016 for Windows (Office 365 subscribers).

One of the extended spell check right-click options is ‘Read Aloud’ to speak the suggested word.

Thanks for joining us! You'll get a welcome message in a few moments.
How to make Office for Mac speak Word 2016: how to check for missed numbering or levels