Microsoft is a slow learner. After seven years they’ve finally fixed an annoying emoji bug in Outlook and they’ve done it in a typically sideways fashion.

Current versions of Office display an incompatible smiley emoji that often appears as the letter  J  – instead of 😊   If you’ve ever seen a message with a  J  in the middle – it’s because of Microsoft.

Office 365 subscribers will eventually get a proper smiley face rolled out in an update to Office 2016 for Windows/Mac.  Fast Track users already have it.

And it looks the same on an iPhone: 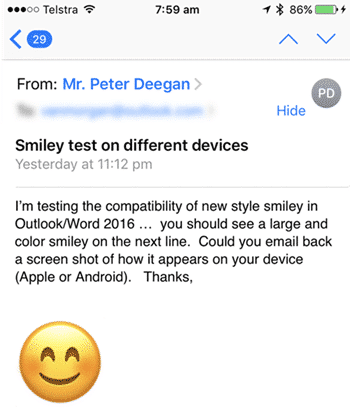 You won’t find this on any official list of Office updates (not so far anyway).  It was noticed by the Twitter massed mind and then confirmed by Microsoft after the fact.

” Outlook uses Word as its authoring tool. Previously, we automatically changed “:)” to a smiley face character in the font face WingDings. When that email would show up in another client that doesn’t support Wingdings font, it can’t show that character. So it gets replaced.  J is the character in the windings font that is a smile, so that is what was displayed in Gmail, iOS Mail, etc.

We’ve recently released an update that fixes this. Now, we properly represent emojis as true emojis. This means any other email app that recognizes emojis will display the emoji in their app. We have also improved Outlook’s rendering of other email services emojis. We are currently rolling out this feature to customers and should complete in the coming year. As with all feature updates, these updates are available for Office 365 customers. “

This is pretty standard Microsoft practice when fixing a long standing bug or problem.  Redmond doesn’t boast about the change because they know it would draw attention to the problem and the years it took before fixing it.

Emoji in past Outlook’s aka the mysterious J

For many years Outlook/Word had a shortcut to convert text into a smiley face.

But it wasn’t a true emoji symbol that all devices would display as a smiling face.  And it wasn’t in color.

Microsoft converted the 🙂 text into a symbol from the Wingdings font (number 74).

Many people saw a letter J  instead of the smiley because ASCII code 74 is the capital J.  If software doesn’t recognize the font and can’t find an equivalent, it displays the character using plain text instead.

Wingdings is a Microsoft font, you won’t find it on Apple or Android devices.  The font is supplied with Office for Mac.

At the time Microsoft wasn’t prepared to properly support emoji so they went for a quick fix. Something that would look good in demonstrations but wasn’t compatible with non-Windows devices.

Making it only work properly for receivers with Microsoft products suited the corporate strategy. Redmond uses all sorts of tricks, large and small, to encourage customers to stick with them.

What has changed with the new, compatible and color emoji?

We had to dig into the guts of a Word document to see how the new smiley face is being coded.

Turns out it’s simple and compatible. The smiley is saved as a true emoji, using the standard Unicode system.

The smiley face used in the new Outlook/Word is the standard Unicode value for that symbol  – 1F60A  known as ‘Smiling Face with Smiling Eyes’.

But unlike the Insert Symbol dialog, the updated symbol is in color.  That’s because Word is now using the Segoe UI Emoji font which has color versions of the main emoji characters.

Dig into the Word document and you’ll see the symbol is inserted directly with some additional XML with font and character code directions.

As you can see from the iPhone image above, Apple substitutes the Segoe UI Emoji font with another font which also has emoji.

Thanks for joining us! You'll get a welcome message in a few moments.
Wannacrypt ROI is why we'll see more ransomware The death of MP3, rise of MP4 and Microsoft PowerPoint