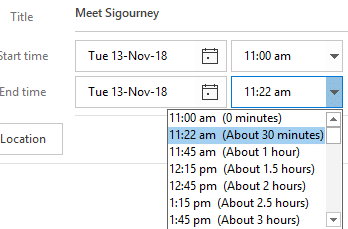 There are ‘end early’ choices for meetings:

You can override the ‘End meeting early’ by typing in the exact end time.


It’s an interesting idea, but is it appropriate as a global setting?  Sure, there are some meetings you’d like to end early but others that you need to stay the whole time.  Would a Microsoftie walk out early from a meeting with Satya Nadella or Bill Gates?

Perhaps this feature should be available for each appointment rather than as a default for all future appointments?

It’ll be interesting to see how this feature develops.  Users on the Insiders Fast Track can and should send feedback with the smiley/frown icons.

Please be polite, real people at Microsoft really do read the Insiders feedback.  They don’t deserve the abusive messages they sometimes get.

Outlook ‘End appointments early’ is available in Office for Windows Insiders build version 1812, build 11100.20000.   Like anything in Insiders, it’s subject to change or even removal.  Much depends on the feedback.

Thanks for joining us! You'll get a welcome message in a few moments.
Text to Excel Date conversion by adding Zero with Paste Special Beat the Office 2019 Price rises