How Word can help your college entrance essay

A New York Times article about parents writing their kids college entrance essay reminded us of a forgotten feature in Microsoft Word.

A feature of modern ‘helicopter parenting‘ is helping, if not entirely writing, essays for their children.

The article How I Know You Wrote Your Kid’s College Essay by JM Farkas, a college essay consultant, explains one simple way readers use to tell if a student or their parents wrote the essay

It’s a simple trick but one that a savvy Word user can easily bypass.

It’s all about the spacing between sentences.

Those of us past a certain age were taught to put two spaces between sentences.  It made sense back in the days of manual typewriters.

Anyone taught typing in the 21st Century learns to put a single space between sentences.

It’s all about how we were taught, habit and muscle memory.

Ms Farkas points out that parents use double sentence spacing but their children use single spacing.

“So to well-intended adults: in those extra spaces, you are leaving incriminating fingerprints on your student’s show of authenticity”

Microsoft Word can check sentence spacing and warn you if it’s not ‘one space’ or ‘two spaces’, depending on your preference. 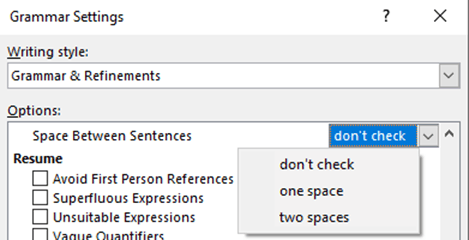 The option defaults OFF, so most people don’t know it’s there.  Go to File | Options | Proofing | Writing Style | Settings.  Scroll down until you see Space Between Sentences.

Choose ‘one space’ if you want to seem younger than you really are <g>.

Now, Word will put dotted lines under sentence gaps which have the wrong number of spaces.

Of course, this option isn’t just for college essays. Use it to enforce you own or an organization style preference.