Make your own 'Snow Flakes' posters in Word or PowerPoint

The British Army has new recruitment posters for Millennials or ‘Snow Flakes’. Make your own versions in Microsoft Office with either Word or PowerPoint.

The campaign targets “snowflakes”, “millennials” and “selfie addicts” with a call-back to the famous Lord Kitchener “Your Country needs YOU” poster.

Here’s our re-creation in Microsoft Word as it might appear in the Empire. 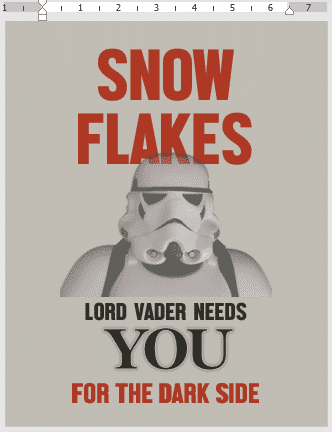 New!  Get the completed Word document and PowerPoint slide, ready-to-use.

Keep Calm with Microsoft Office now has the ‘Snowflake’ document and slide included in the ebook.

Here’s how to make your own in Word and PowerPoint.  Add your own funny or serious text and picture.  In the spirit of past Office-Watch.com projects like Keep Calm with Microsoft Office.

We’ll show the fonts and settings to use. Also how to change a regular picture into the grey, partly transparent version.

Front Page Neue, about 140pt, no change in the character spacing.

The first letter of each word appears to be in bold (hard to tell from the images online). An initial bold letter makes a very subtle difference.

That’s the easy stuff, now let’s look at the more interesting (not hard) parts remaining.  Formatting the ‘YOU’ line and making the middle image with overlapping.

The important ‘YOU’ line is a serif outline font.  We chose Georgia (supplied with Windows/Office), about 110pt.  Bring the letters closer with character spacing: Condensed, 10pt

The outline effect is difficult in Word.  There’s no way we can find to have a character outlined with two colors (ie the white then an outside border).  The closest we can do is the Shadow effect which creates the outer border.

Positioning is a little different from normal. The image overlaps the text above it.  Insert the image below the top lines then change positioning to ‘In front of text’.  Drag the image up a little so it overlays the text.

The formatting details are much the same in PowerPoint.  Stretch some of the character spacing so it fits the landscape oriented slide more easily. The major difference is the ‘YOU’ line.

PowerPoint doesn’t have all the text formatting options (aka WordArt) available in Word.  Either leave the text in Georgia font with a shadow (as we’ve done), add a specialist outline font or take a small screen shot of the letters in Word and paste into the slide.

Thanks for subscribing!
Office tricks make a photo gray and transparent Microsoft pulls Office 2010 update, won't say why, but we will
View our latest eBooks!