Adjusting line spacing to put lines very close isn’t usually necessary for regular text.  It becomes useful when trying some design tricks for headings, for example the title in our Millennium poster.

The left example has selected the top line.  Selecting a line shows the amount of space Word has allocated above and below the line.  That’s a clue to what needs adjustment.

There’s no one setting to check. Instead a few options to check and adjust until you get what you want.

A Line Break will usually make a smaller gap between two lines.

Turn ‘Show all’ on (Home | Paragraph | Show All) to see both Paragraph marks (the reverse P or pilcrow, left) and line breaks (angled arrow, right).

Open the paragraph spacing dialog from the little button at bottom right of the Paragraph section of the ribbon.

Check the Spacing, Before or After settings. 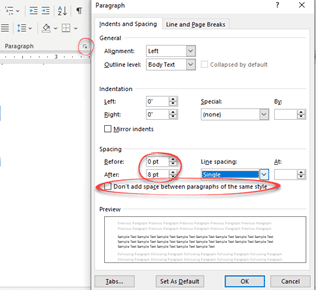 Maybe all you need to do is reduce one or both of those.

Don’t add space between paragraphs of the same style

Just below those choices is “Don’t add space between paragraphs of the same style”.

Checking that box will remove the before and after spacing, assuming both lines have the same style.

If those options don’t work, it’s time to break out the major nerd tricks. Reducing below single line spacing.

Set the Multiple line spacing value to less than one eg 0.7

Try out various line spacing fractions until you get what you need.

There’s a catch.  Reduce the line spacing too much and the letters will be cut off. Here’s an example with 0.5 line spacing.

We usually settle for something in the 0.7 to 0.8 range to get the lines close together without clipping the tops of letters.

Tables are the secret trick for all Word nerds.

Put each line in a cell then adjust the row heights until they are as close as you need.  Turn the table gridlines off and it appears as two lines of closely formatted text.

Close line spacing with a table (left, gridlines showing) and how it appears in the final document (right). 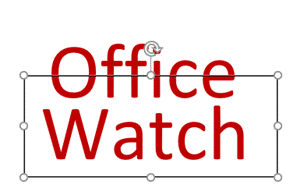