Here’s the details including Microsoft’s report on ‘Notable Fixes’.

Outlook 365 for Windows now has a Sun/Moon button when using Dark mode and the black theme,

Sun/Moon switches the reading and compose panes between a dark or light  background.  That’s a good move because while you might prefer dark mode, most readers of your messages will see it with a light/white background. 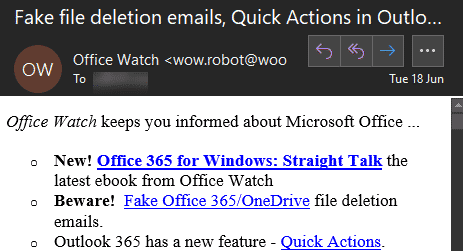 According to Microsoft, enable this feature from File | Office Account | Office Theme and choose the Black theme.  For some reason the Sun/Moon icon isn’t appearing in our test machines.

There are some known issues with the feature, that should be fixed in later versions.

Thanks for joining us! You'll get a welcome message in a few moments.
What’s up with the Office key? Simple Yes, No drop down list in Excel