Office 2016 bug fix pulled because it was buggy!

They’ve done it again … Microsoft released a bug fix for Office 2016 that caused a bug in the software!

The faulty patch is KB4462238 which applies to Office 2016 installed with the older .MSI method, not the more usual ClickToRun method and not Office 365 customers.

After installing the patch, clicking a hyperlink in Word, PowerPoint, Excel, or Outlook can ‘freeze’ the entire program. Also opening or syncing notebooks in OneNote can lock up the application. 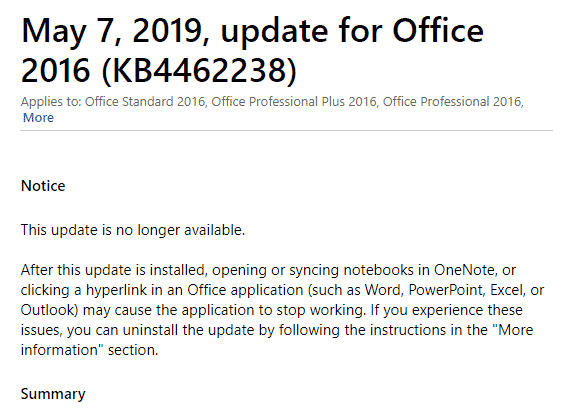 Microsoft has stopped issuing the patch but it’s up to affected customers to research and fix the problem themselves.

If the buggy patch has afflicted you, uninstall the KB4462238 update from Windows Update | View Installed Updates.

Thanks for joining us! You'll get a welcome message in a few moments.
Put the latest Stock and Fund prices in Excel workbooks WhatsApp security bug - what to do and what to worry about