Keep the deleted Crayola color in your Office documents

One of the colors in the Crayola box is being dropped. Never fear, the color Dandelion can be part of your Office documents as can any other Crayola color.

It’s not the same as the smell and feel of a Crayola crayon but it’s better than losing the color entirely.

Dandelion is being removed from all Crayola boxes to be replaced by some blueish newcomer.

Make Dandelion the color of text, drawings or backgrounds using a custom color: 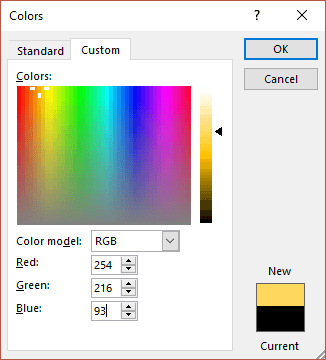 We found the RGB settings for Dandelion and all the other Crayola colors from Wikipedia.

Thanks for joining us! You'll get a welcome message in a few moments.
Scheduling an Access Task Why Office security patches should always be installed
View our latest eBooks!