Microsoft’s promotion of a new OneNote for Windows 10 feature is, to put it politely, misleading.

The updated app doesn’t do what the hype promises.  You can’t insert a meeting from ‘Outlook’ and not ‘Outlook 2016’ as Microsoft alleges.

Hype vs Reality is something all Microsoft customers are familiar with, but this goes beyond some marketing zeal.  It’s outright wrong and must have passed many Redmond eyes, who knew it was wrong, before it went public.

According to Microsoft on their support site there’s an ‘Insert meeting details’ feature in the OneNote for Windows 10 app.

It’s supposed to be compatible with ‘Outlook 2016’ which seemed unlikely to us.  Windows 10 Modern apps rarely, if ever, interact with traditional desktop applications.

What really happens in Outlook for Windows 10 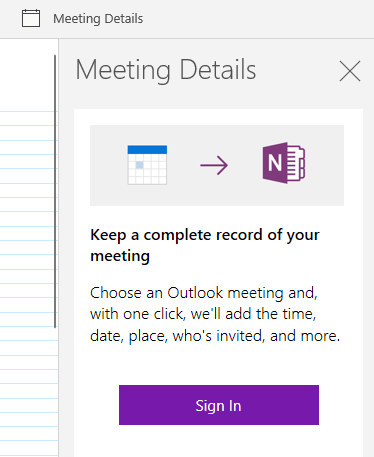 Tap ‘Sign in’ to see the standard login to Microsoft’s online services.

There is no link to Outlook for Windows, let alone ‘Outlook 2016’ as Microsoft alleges.

Stick with OneNote for Windows (the traditional desktop app).  It has more features and really does let you insert a meeting from Outlook 2016 for Windows.  On the Home tab | Meeting Details

It’s not the first time that Microsoft has talked about ‘Outlook’ in a context where the regular reader would assume they meant ‘Outlook for Windows’. Closer checking reveals they mean the ‘Outlook.com ’email hosting – not the popular program.

There’s no excuse for this. Microsoft itself decided to call many products and services ‘Outlook; then misuse the generic term when a specific type of Outlook should be used.