Soon you’ll be hearing about Timeline, a new feature in the next version of Windows 10.  It’s a way to see which documents and files you’ve opened across all your devices.  What you won’t hear is that Office already has a similar feature.

The Office team has already synchronized the Open / Recent Documents lists across Word, Excel and PowerPoint for PC, Mac, Apple and Android devices.  The upcoming Timeline is an extension of an existing feature.

All you need is to save the document to OneDrive and use the same Microsoft account across all your devices.

Microsoft pushes customers in various ways to save all their documents to OneDrive.  But we don’t recommend doing that for your privacy and security.  Saving everything to OneDrive is good for Microsoft, but not necessarily their customers.

Instead, save selected documents to OneDrive leaving most of your files out of Microsoft’s grasp.

Here’s a document I’ve saved to OneDrive on a PC.  It happens to be the Timeline chapter for an upcoming update to our book Windows 10 for Microsoft Office users.

Without doing anything, the same document appears in the Word Recent Document list on … the Word Mobile app, Apple Mac (Word 2016), Word for iPad, Word for Android and Word for iPhone. 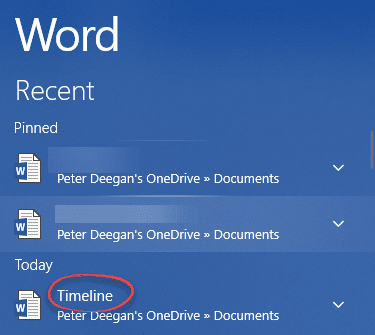 Pinned items are also synced between devices.    Pin a document on one device will put it on the top across all your copies of Word, Excel and PowerPoint.

While Microsoft Office promotes integration with other cloud services like Dropbox, Box, Egnyte etc, that integration isn’t as complete as the link with Microsoft’s own OneDrive.

Thanks for joining us! You'll get a welcome message in a few moments.
Why Libraries are great for Office users and why Microsoft hides them Outlook's appointment location annoyance