Criminals try using Microsoft Office to get money from you using various phone scams impersonating Microsoft.  Here’s how to protect yourself.

Scammers are clever, sophisticated and look very sincere. Often there are stark warnings about dire consequences.  In the end they want your money, infect your computer, steal your personal information or all three.

The scams take various forms but amount to impersonating Microsoft Support.  Late last year we told you the story of a Dutch reader who was tricked into paying over US$500.

Office 365 phone scams usually start with some on-screen ‘warning’ of a problem then get you to call a number for ‘Microsoft Support’.

Most likely, these are web popups or malware that’s managed to get onto your computer.

We’re intrigued to read reports of scams involving Microsoft Office activation.  There’s a rare situation where it’s genuinely possible to see a message saying to call Microsoft.  If online activation fails, Office may show a message with a phone number to call.

There are reports of fake Office activation failure messages with a ‘Microsoft Support’ number to call.

Genuine activation failure messages with a phone contact are rare.  Microsoft may not even do that anymore, though it was definitely something that happened in the past.

If you see a prompt to call ‘Microsoft Support’

If you see an onscreen message during install or activation of Microsoft Office, it may be legitimate but probably is not.  The problem and contact number should be treated with extreme caution.

This is the same advice if you get an email from your bank etc.  Don’t call the number or click the link in the email.  Instead contact the company/organization direct.

Only call the support number after verifying that it’s really from Microsoft. A good place to start is Microsoft Support global phone numbers.

Search online for the phone number and see what pops up.  Ideally, the number will be listed on a Microsoft.com web page or appears on some other site as a known scam.

If it’s not listed at Microsoft, then the chances of a scam are even higher.  Sadly, that’s not foolproof.  There’s a small possibility that Microsoft hasn’t updated their support number list online.

You could try the Microsoft Support Virtual Agent.  Virtual Agent looks like an online text chat, except that the replies come from a computer. 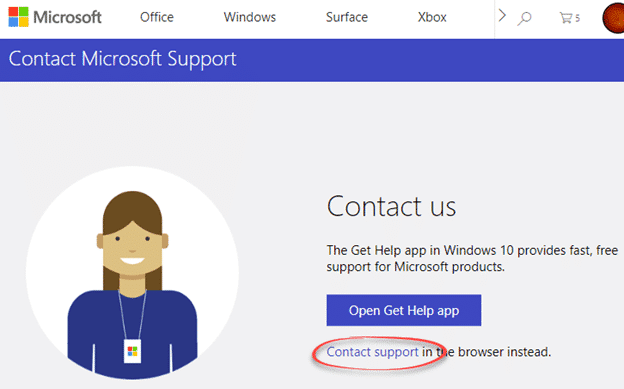 Virtual Agent a great idea for Microsoft because it saves them support costs.  In practice, the ‘AI’ seems designed to avoid answering a direct question.

We tried asking the Virtual Agent a simple question.  Was a certain phone number a real Microsoft Support contact (it was) .  The much-hyped AI would not directly answer this reasonable and common type of question. 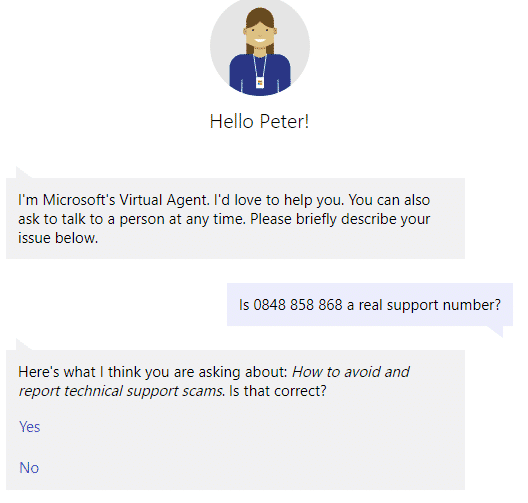 What followed is generic information about tech support scams which is no help for someone with an immediate problem.  At the very least, the Virtual Agent could point to Microsoft’s own list of support numbers.

The Virtual Agent does have a ‘chat to human’ option.  Try that for a better answer.

If ‘Microsoft Support’ calls you

If you get a phone call from ‘Microsoft Support’, ignore it. Hang up the phone.

There are plenty of other sites offering ‘genuine’ Office downloads – ignore them.  Who knows what little unwanted ‘extras’ have been included.

Microsoft asks that you report support scams to them.  Perhaps the accumulated information might help Microsoft and law-enforcement stop some of the criminals.