Excel has a Calendar Creator template which might work or might not.  Why it doesn’t work is a mystery.

Find it from File | New then search for calendar creator.

When the template is opened, it should display a calendar for the current year.

Change to another year by typing another value into the cell.

If all goes well, you’ll get a full year calendar.

Or that’s the theory.  On some Excel 365’s the calendar creator doesn’t work!

We don’t look for bugs in Office, they find us!

Several readers have confirmed our experience where the same template doesn’t work.  No matter what you do, the dates don’t appear properly.  February 2019 does start on a Friday, but not in the fifth week.  Traditionally February has 28 or 29 days, not 9 <g>. 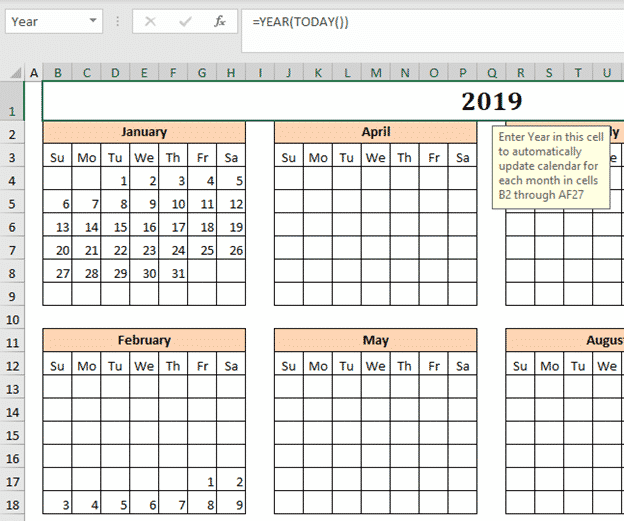 What’s the difference?  Good question with no clear answer.

For us, the difference is between the latest public release and the most recent Insiders version.  Office Watch readers have also reported problems with the public release.

All you can do is try for yourself.  The problem will show up as soon as the template is opened.

If the dates for April are empty, you’re out of luck.

Something about the February calculation is the problem.  Because the template doesn’t get February right, the rest of the months are messed up.

We had a look at the code but there was no obvious fix.  If you can figure it out, please let us know so we can share with others afflicted.

Thanks for joining us! You'll get a welcome message in a few moments.
Make Excel calendars better for you. 2020 calendars in Word and the tricks to make them special