Get faster Internet and Wifi from ISP supplied modems

Here’s one simple tip for getting better Wifi speeds from an existing cable or ADSL modem.

It’s a tip that had not occurred to us before but definitely works because Peter has just done it!  We’re obliged to Jack Randall for pointing it out.

ISP supplied modem can be cheap and nasty

The slow-down point in an Internet connection can be the Wifi part of the modem.  Many modems supplied by Internet Service Providers (ISP) are cheap, nasty and slow.  They do the job but badly, especially the Wifi element,

There are two issues with these cheap modems:

Speed up your Wifi with extender linked via Ethernet

Setup your own Wifi network with a wifi extender that links to the modem with an Ethernet cable.  That’s assuming the ISP modem has some Ethernet/network cable sockets, most do.

Many wifi extenders link to the modem using wifi – that’s NOT what you want.  Those devices are for expanding the range of wifi coverage over a distance. We want to increase the overall speed.

Using a network cable to link the modem to a better wifi device will bypass the poor wifi hardware in the modem.

A good Wifi extender will have better and faster hardware.  It should give you a faster and more stable connection.

In some cases, it’ll expand your Wifi connection options to the faster 5Ghz options too.

Where possible, use network cables to connect your modem to high-bandwidth devices like computers and streaming boxes. You’ll get a faster and more reliable connection than Wifi. It also relieves the demand on the wifi network, leaving more bandwidth for other uses.

The network cable connection can be short with the extender sitting next to the modem.

Or you might like to position the wifi extender somewhere else in the home/office using a longer network cable.  A place more central, higher or with less obstructions.

We’ve seen places where the wifi hub is in a corner or behind furniture and the owners wonder why wifi reception is bad!

Those little arms make an amazing difference to the Wifi signal strength.

Ideally the Wifi extender will have an antenna socket or antennas that can be unscrewed and replaced with a larger antenna.  Sadly extenders with that feature are rare and expensive.  An extra antenna is rarely needed in most home and offices, so it’s not a big issue.

Extenders with two antennas (one each for 2.4Ghz and 5Ghz signals) should be enough for most situations.

Here’s a real example of this tip, as done in the last few days. The UK Virgin Media modem/wifi box was giving very slow speeds and poor reception throughout a three storey house.

The fix was to connect a NetGear AC1200 WiFi Range Extender (EX6120). As you can see, it has a network cable socket and two antennas.

(there are other wifi extenders available from many manufacturers. We used the AC1200 because Peter was already using and knew it would do the job).

The Extender was plugged into a power socket next to the modem. The two were linked with a very short network cable.

Run the setup on the Extender to create two new wifi locations (SSID), one for 2.4Ghz links and the other for 5Ghz.  Or perhaps a single SSID with both links, depending on the extender.

2.4Ghz wifi is slower but covers a greater distance and penetrates walls better.  Many older devices can only use 2.4Ghz but they don’t usually need faster Wifi anyway.

5Ghz wifi is much faster but doesn’t travel as far. It doesn’t pass as well through walls or obstructions.  Newer devices work with both 5Ghz and 2.4Ghz.

The results of switching from the cheap ISP modem to separate Wifi were spectacular to put it mildly.

That’s with the wifi extender sitting right next to the original modem.  We may get better coverage through the house by repositioning the extender.

It proves that the modem was getting a fast connection to the Internet but not passing all that yummy bandwidth along because of it’s bad wifi hardware.

Here’s the numbers for both 5Ghz connections

From the Virgin Internet modem:

From the wifi extender 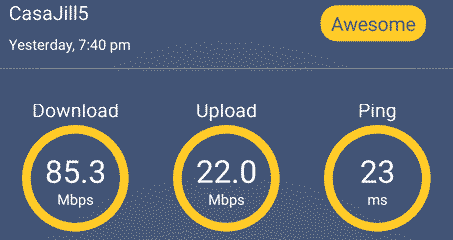 Put WhatsApp on your PC, Mac or tablet

Signal ‘gets’ Office documents and PDF’s at last!

« Keyboard Shortcuts for Styles in Word  » Do you have your tech ‘eggs’ in different ‘baskets’?