Inside the Office ‘all in one’ app for Apple and Android

A new Office app for Android a single ‘all in one’ app for Microsoft Office. We’ve done our own look at the new app, not relying on Microsoft’s hype to check out the Home panel, Actions, Word, Excel and PowerPoint features, PDF viewing and options, ‘image to text’ features and how to bypass a major limitation of the new Office app.

Office app combines the individual Office apps into a single program plus PDF support and Office Lens ‘image to text’ features.  Word, Excel, PowerPoint plus PDF, Notes and Media support.   There’s nothing truly new in the Office app but it makes many existing features more obvious and accessible, especially ‘image to text’ options.

Not a replacement for mobile apps

It’s wrong to say that the new Office app is a replacement for the individual Office mobile programs.  That might be Microsoft’s preference but not necessarily good for customers.

There are compelling reasons for keeping Word, Excel and PowerPoint Mobile apps plus the Adobe PDF reader, if only to workaround limitations opening more than one document at a time.

The Home screen displays recently used Office documents. If you’re using Office 365 and OneDrive the list will synchronize with the recently used lists on other machines. If available, Recommended Documents will suggest files you might want from your organization.

The Plus button reveals buttons for:

Lens – the useful camera to document

The Documents pane shows some features for Word, Excel and PowerPoint.  Start a new document from these choices.

For the moment there’s ‘image to text’ options for Word and Excel.

For PowerPoint, choose multiple photos from the device and they’ll be added as individual slides into a new presentation.

It’s begging for more to be added and surely there will be.

Actions is a useful summary of some Office app features

Transfer Files – a method of exchanging files between your computer and the device.

Share Nearby – a seemingly related option to share files directly with another person who also has the Office app.

The Office Lens and Excel Mobile options to convert a picture into text (OCR) or to a table for Excel.

Sign a PDF, add your scrawl to a PDF

Scan to PDF, photograph a document then make a PDF including any text. Another part of Lens, repurposed into the Office app.

Pictures to PDF – select multiple photos and bundle them into a PDF for sharing.

Document to PDF – select an Office document then ‘print’ to a PDF.

Scan one of those square barcodes (QR Code) and drop the text into Note.

These three features are supposed to have the same features as the stand-alone apps.

The stand-alone apps can be installed and run on the same device as the merged app.  At the moment, there’s no way to select a doc/sheet/deck in the Office app and open it in the separate app instead of the integrated version.

Here’s the current Word menus within the Office app.

The Office app is said to use less space on the device drive than the combined Word, Excel and PowerPoint apps.

Each of the mobile apps has common code used by each program but has to be downloaded and saved separately. That means there’s some duplication of files and resources between Word Mobile, Excel Mobile and PowerPoint Mobile.

As a single app, they can share those common features from a single set of files. But there’s a price to pay for that smaller footprint by limiting the documents that can be opened at the same time.

A big problem with the ‘all in one’ approach is switching between windows.

Android has various methods of switching between different apps (depending on your device) but not windows within a single program.

That’s not as big a problem with the Office app.  One Word, Excel or  PowerPoint document can open in a separate Android window, so you can switch more easily.  Here’s the Android open apps list with ‘all in one’ app and it’s integrated Word side-by-side. 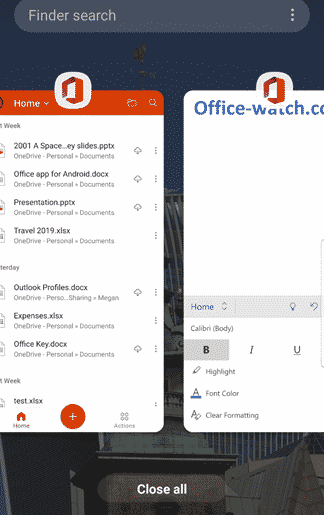 Only one document open at a time

Sadly, the Office app can only open one document at a time. If you open a Word document when a worksheet or presentation already open, the already open document will close automatically.

It’s not possible to open, for example, a Word document and an Excel worksheet at the same time within the Office app.  But there is a way to do it …

Opening more than one document

We’re still limited to one open document per app. But the Office app opens up the possibility of having two Word, Excel or PowerPoint docs open at the same time.  Open one doc in the Office app and the other in the stand-alone version.

Two PowerPoint decks open at the same time; the Office app on the left and PowerPoint app at right (note the different app icons above the windows).

A little surprisingly, there’s good PDF support in the Office app. It goes beyond simple viewing PDF’s or conversion to a Word document.

You can draw, highlight and sign a PDF using edit tools.

There’s a separate Share button to share either the file or a link to the file (if saved on OneDrive). The menu at right of the edit icons opens more options; Convert to Word, Search, Save As, Print and Zoom in/out.  Of course, the usual two-finger pinch gestures will zoom in or out without the menu.

Only one PDF can open at a time. Unlike Word, Excel or Powerpoint, PDF’s open in the Office app window. It’s possible to open an Office document and a PDF simultaneously from the Office app, but only if the PDF is opened after the Office doc.

‘Signing’ means a handwritten scrawl in black, blue or red ‘ink’ but not a secure digital signature. The signature can be saved for reuse in other PDF’s.

Import a photo into the signature pane from the photo icon at bottom right.

Essentially the ‘signature’ option is really a way to add a drawing or image into a PDF.

Image to text or worksheet

The Actions pane reveals the image conversion options.  These OCR (Optical Character Recognition) have been in Excel Mobile and Office Lens for some time.

The picture can be taken live from a camera OR an existing photo.

Is one Office app better than separate apps?

It’s not an ‘either / or’ choice.  For some people, the ‘one stop’ app notion will have advantages.

There are some benefits to having Office features in one place.

If storage space is limited, the Office app will take up less space than the three individual mobile apps for Word, Excel and PowerPoint plus Lens and any PDF viewer.

The Lens and photo to document/table features are more obvious and accessible in the Office app than in separate apps.

However, the ‘one open document’ limitation means there is definitely a place for the separate Word, Excel and PowerPoint mobile apps.  Hopefully Microsoft isn’t thinking of dumping the individual apps in favor of a single Office app.

Office Lens app has some features like WhiteBoard and Business Card that aren’t available in the merged app.

People who use Office a little will probably like the Office app.  More advanced users can use the Office app plus the individual Word, Excel and PowerPoint apps as well.

Microsoft’s reasons for making this ‘all in one’ app aren’t public but it seems the benefits of the app have more to do with corporate strategy than usefulness for customers.  Redmond is trying to take over Apple and especially Android devices with a series of apps intended to make Microsoft software and services prominent on other platforms.  The new app is part of that plan.

How to get the Office app

The Office app is in preview, in other words ‘use at your own risk’.

Google Play Store has it for all comers.

« Difference between ‘Pickup where you left off’ and GoBack ‘Shift + F5’. » Unhelpful Office error message for Read Aloud