We all have many forms of communication clamoring for our attention – phone calls, SMS/texts, email to various accounts and instant messaging.  Checking each of these can be a pain in the (you know where).

Facebook Messenger is one messaging service that you can do without.  WhatsApp or Signal are far better.  To make things stranger, WhatsApp is also owned by Facebook.

There isn’t even an ‘Out of Office’ or auto-reply feature that you could use to point people to your preferred contact method.

It makes sense from Facebook’s viewpoint.  They make money when people are on the Facebook site.  An option to disable or mute Messenger would mean less revenue for Facebook.

Your only option is trying to abate the Messenger nuisance so it doesn’t intrude.

Before we look at the settings available, there’s a simple, effective way to stop people contacting you on Facebook Messenger.

After a short time, contacts will get the message (no pun intended) that you don’t respond to Facebook Messenger and they’ll try some other way to contact you.

According to Facebook help, open the separate Messenger app and tap the Active button to toggle on/off.

We have the Android app to hand so here’s the steps to silence Messenger.

Tap on the head/menu icon at top right then the gear icon to reveal the Facebook chat option. 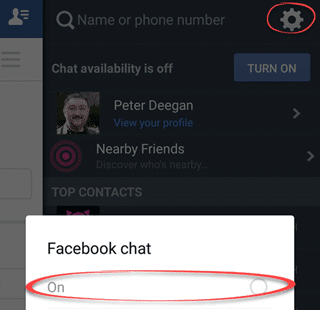 Tap on the menu to toggle Facebook chat OFF.

Facebook then shows a prominent prompt to turn chat back on – ignore it.

As an additional precaution go to the apps main Settings menu, Notifications and turn off any that you don’t want.

The Notifications switch at top right is not a global toggle on/off.  Instead it merely gives the choice to ‘mute’ notifications for up to a day.

To totally stop notifications, deselect all the options (Wall Posts etc) and, “for the more better assurance” also turn off the Vibrate, Phone LED and Sounds options.

On the Facebook web site look at the bottom right corner for the chat bar and the Settings / gear icon. 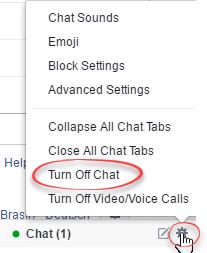 Tap on the gear icon then choose ‘Turn Off Chat’ then choose whether to turn all chats off or just some.

Thanks for joining us! You'll get a welcome message in a few moments.
How to keep messages secure - via TeenVogue Teams goes live but not public