Microsoft has announced some truly important improvements in what you get with Office 365 Home, Personal and University plans.  The Home plan will be available for six family members instead of five.  How Microsoft calculates use of Office software is changing and for the better.

All these changes apply from 1 October 2018 onwards for existing and new Office 365 Home/Personal customers plus Office 365 University and Office 365 Home Military Appreciation Edition.

Microsoft is downplaying it, but the announcement includes a fundamental change in the way Office licence entitlements are calculated.

Microsoft will start counting the number of Office logins at any time instead of how many installs of Office products.  More on that below. 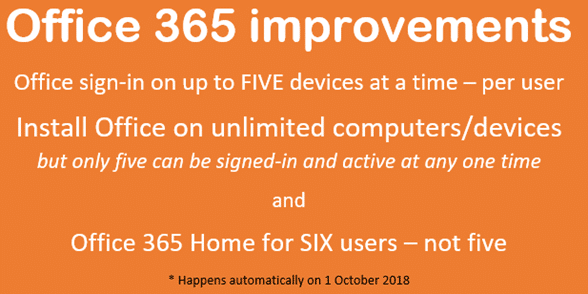 Most people will NOT be immediately affected by the changes.  There’s no need for concern.

Office 365 Home and Personal use can be greater from 1 October.  We can’t see any situation where an Office 365 customer will get less out of these changes.

Office desktop software for Windows or Mac will be available on more of your computers than at present.

For power or advanced users, there may be opportunities to install Office on more computers than in the past.

Until now, Office 365 Home has allowed five users access to the Office 365 goodies.  That’s going up to six people from 1 October.

From then, six users each get:

Microsoft Family is an Office 365 Family

If a family member buys Office 365 Home, invitations to join the Home benefits will be automatically sent to five of your MS Family members.

You’ll be able to withdraw those automatic invitations and invite into your Home plans other people.

This is a big change to Office licenses.

It’s a totally new way of counting and limiting use of Microsoft Office.

Thanks for subscribing!
Watch your data being saved underwater, live When can Office 365 customers get Office 2019 for Windows or Mac
View our latest eBooks!