This is a big change to Office licenses.

It’s a totally new way of counting and limiting use of Microsoft Office.

As long as there’s been Office, licences have been based on installations of Office.  A single Home or Personal plan user is allowed to install one copy of Office for Windows or Mac on a computer plus multiple copies of the Office apps on devices like phones and tablets.  Office software is ‘activated’ to allow full use of its features after installation.

From 1 October what matters is how many times you are simultaneously logged into Office using your Microsoft account.  That’s the login on the top right of an Office program or app. 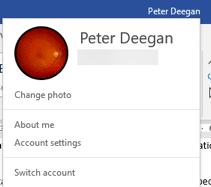 You’ll be able to use Office on up to FIVE devices/computers at a time.  Microsoft will keep a count on how many sign-in you have at any time.

Each sign-in will activate the Office software.  Office will check with Microsoft’s servers to see if your Microsoft account is linked to a current Office 365 subscription.  If you are a subscriber, then Microsoft will allow your Office software to run with all the features.

When you sign-out of Office on a computer, that software is deactivated. It will only work in a very limited way (Read Only mode) until someone signs-in again.

Office software/apps can be installed on as many computers/devices as you like. Office will only fully activate on the current five logins you make from the software.

– one user who can sign-in to Office software on five devices at the same time.

– one user who can sign-in to Office software on five devices at the same time.

– each of the SIX users can sign-in to Office software on five devices at the same time.

If you sign-in to Office with your account on a sixth device, there’ll be a ‘limit reached’ message.  To continue you’ll have to logout of another computer/device.

For many people this change won’t matter.

If you have Office 2016 for Windows/Mac plus Office Mobile on a tablet and smartphone – there’s no change.  You’ll be logged into Office on three devices with two logins to spare.

All Office installs are equal

Also changing is the difference between Office desktop software (Windows or Mac) and the Office Mobile apps.

Until now there have been separate license limits for the desktop software (per computer) and Office Mobile apps (per device).

From 1 October it does not matter what type of Office bundle you use, desktop or mobile apps.  All that matters is how many simultaneous logins you’re using.

A single user should be able to install and run Office desktop software on five different PC/Mac’s if they wanted to.

Computers out, Devices in

Microsoft is dropping, for Office 365 licencing, the difference between a computer and a device.  They are now using the term ‘device’ to apply to any computer hardware running Microsoft Office

This change will mostly benefit power or advanced users with multiple computers and devices.

It means people will be able to install Office as many times as they like on many computers or devices.  As long as they stay below the five login limit, there’s no problem.