Microsoft has released a patch for the latest security bugs in Office 2016 and 2011 for Mac.

Three different memory corruption bugs are fixed. A hacked document tinkers with computer memory and tricks the computer into running an unauthorized program.  We’ve seen these problems before and we’ll see more in the future.

One memory corruption bug had already been detected and patched in Office for Windows.  The same bug is in Office for Mac, both 2016 and 2011 versions.

The other two bugs apply only to PowerPoint for Mac 2011 – here and here.

Most people won’t need to do anything.

Office 2016 for Mac has AutoUpdate which should update your Office to v15.34.0.  If you wish, start AutoUpdate and click ‘Check for Updates’. 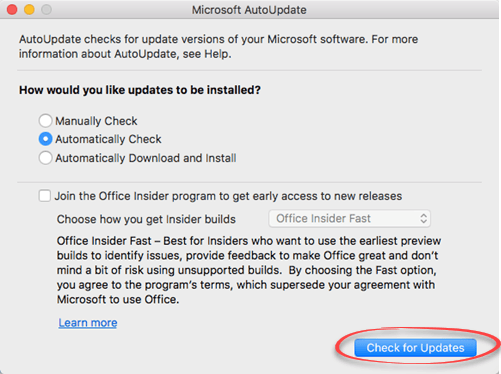 The same update adds the Dubai font to the Mac and a few minor features.

Office 2011 for Mac also has AutoUpdate that should do the job to update to v14.7.4 or download the patch from here.