2001: A Space Odyssey and font kerning

Last week we looked at design and typography in 2001: A Space Odyssey and how to use the ‘2001’ look in Microsoft Office.  Two readers asked about some curious kerning in our version of the title font.
Maybe you’re not interested in the fine detail of the text in a fifty year old film?  Fair enough.  We’re going to this trouble because it’s an example of the difference between the automatic kerning available with Office and sophisticated manual kerning done by experts.

Here’s the original, note the closeness of the spacing between the zero, the one and the colon.

Detail from title card of 2001: A Space Odyssey

It’s generally agreed that the nearest modern equivalent font is Gill Sans but with the curiosity that the zeros are the capital letter O instead of the digit.  That unusual character combination is probably what causes part of the kerning issue.

MS Office comes with Gill Sans MT which has heavier/wider strokes that the movie title. A closer match to the original is Adobe’s Gill Sans Light which we’ve now installed.  Here’s examples of both the Microsoft and Adobe fonts with and without automatic kerning in Office 2016 for Windows. 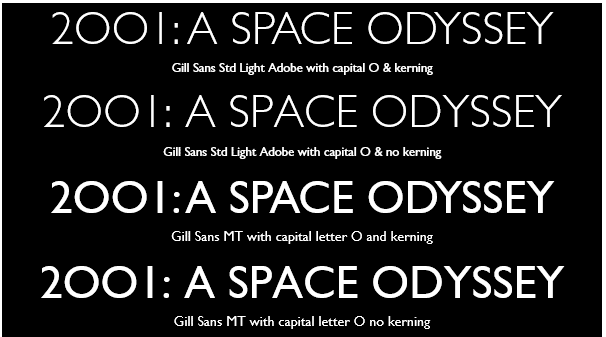 To our unpracticed eye the kerning of ‘O1’ looks wonky in all four examples, compared to the movie original.

The colon is spaced evenly between the 1 and A but the movie title has the colon close to the digit.

With maestro Kubrick it’s almost certain that all the titles were closely managed including manual kerning.