Why is Microsoft Office product activation so difficult?

If you get an error message when trying to activate Microsoft Office, settle in for a difficult time.  Microsoft doesn’t make activation easy to understand, let alone fix activation problems.

Office activation is where newly installed Office software is authorized by Microsoft’s servers.  Without activation the software only has very limited features.

For Office 365 users, product activation checks that you have a current Office 365 ‘subscription’.   There are regular checks by the software but it’s usually the one after installation that has trouble.

Perpetual licence Office takes the Product Key entered at installation and verifies with Microsoft that the Key is valid and not misused.

That’s all fine when product activation works properly.  It should only take a few seconds with an internet connection.

When product activation doesn’t work, Microsoft let’s its customers down badly.  The error messages, such as they are, tell you very little.

Looking up that error code online isn’t a lot of help. There are plenty of online forum discussions and suggested fixes.  You’ll look in vain for anything official from Microsoft.

What to do when product activation goes wrong

You can try the suggestions on the Microsoft Office support page. These aren’t specific to any error code and are mostly aimed at clearing away more obvious problems. 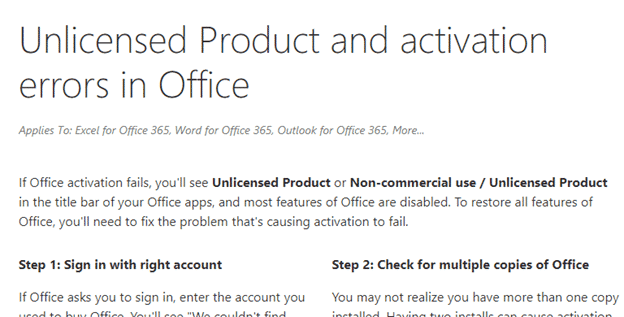 In short, Microsoft’s suggestions are:

Beyond that, there’s little help for Mac users.  Calling Microsoft Support is your best bet.

For Office 365 ‘subscription’ products Microsoft has a Support and Recovery Troubleshooter that you can download and run.

In theory, it should identify and repair activation problems.  Maybe it’ll work for you.

We’ve used this troubleshooter many, many times and it’s rarely (if ever) worked to clear activation problems.  It’s either (wrongly) said there’s no problem or done some repairs which made no difference.

Failing all that, call Microsoft Support in your country.

Be at your computer with a note of the exact error code you’re seeing.

Tell them what you’ve tried to do and hopefully they’ll find more details in Microsoft’s private Knowledge Base.

We’re inspired by the Houston Chronicle’s “Dr Mac” who had the devil’s own time getting his Office for Mac software activated.  It appears he struck an activation bug in Office for Mac because Microsoft emailed saying he “should be able to activate successfully now.”

Thanks for joining us! You'll get a welcome message in a few moments.
What are you buying with Microsoft Office? Microsoft Whiteboard in depth, so you won't have to