Complete guide to adding placeholder or filler Text in Word

Microsoft Word has several ways to quickly insert placeholder text into documents. Sometimes you want to add some random text to a document as filler, but don’t want to think of something to write yourself. While there are websites that will generate placeholder text for you, it is also possible to do this directly within Word itself.

Microsoft Word has several ways to quickly insert placeholder text into documents. Sometimes you want to add some random text to a document as filler, but don’t want to think of something to write yourself.  Here’s the three options in Word plus the settings and maximum values.

You can add placeholder text either in your local language or in Latin.

Latin placeholder text, specifically a passage called lorem ipsum, is popular with designers who want to focus on the layout of their document without being distracted by the content.)

For all three options type the command on a new line then press Enter. The command will be replaced with some placeholder text.

This works in all modern versions of Word including Word for Mac, Android and Apple iOS.  =Rand() has been in Word for Windows in various forms for a long time.

To control the number of paragraphs, simply add numbers to the function e.g. =rand(x,y),

If you only type one number, that will be the number of paragraphs (which will all have the default of three sentences).

The text will be generated in whatever font or style is selected when you type the function. You can then format it however you like, just like regular text. (If you have selected a Heading style, only the first paragraph will be in that style and the rest will revert to Normal style).

We just tested with Word 365 for Windows and the same maximum values still apply … almost.  =Rand(201,99) (one more paragraph) worked.

Those max values produce over 1.7 million characters or 310,000 words on over 600 pages.  That should be more than enough for most people. Word will be very slow and almost unusable at those sizes.

Type =rand(3,5) for three paragraphs of English text, with five sentences per paragraph. 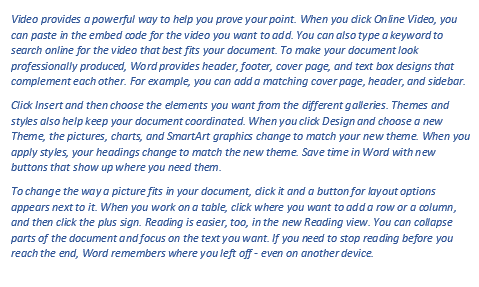 Default: 3 paragraphs of three sentences each.

Type =rand.old(4) for four paragraphs of the same sentence.

That was before Microsoft realised that =Rand() could be used as an unsubtle promotional tool for Office.  In Word 2007 and later the original command was renamed =Rand.old()

The text varies for each language version of Word (not the language setting for a document/paragraph).

A long time ago, Office Watch polled readers to see what sentence was used in each language

Non-English speakers with a non-English version of Word …

Please try =rand.old() on your version of Word. Let us know what phrase Word uses in your language via our Feedback page.  A rough translation would be helpful but not required.

Unlike when we first asked back in 2003, now email commonly supports many different languages and characters.  We’ll be able to publish in Office Watch newsletters and web site the full results.

Thanks for joining us! You'll get a welcome message in a few moments.
What’s the earliest date possible in Outlook and workaround. Word for Android reaches a real billion milestone