Where’s my Excel with Dynamic Arrays?

Microsoft says that Dynamic Arrays have arrived but Excel 365 users beg to differ. Despite the company’s written assurances, the promised feature is nowhere to be seen.

What’s new in Office 365 is very firm the Excel 365 for Windows, Mac, Apple, Android and Windows Mobile should all now have Dynamic Arrays. 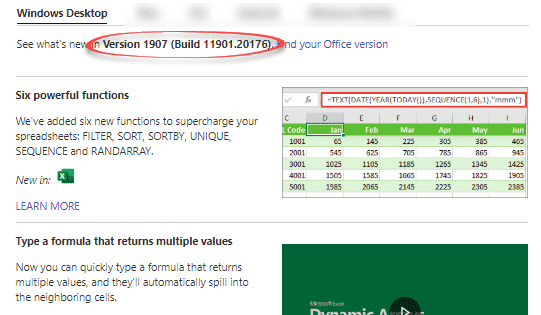 But there’s plenty of reports that Excel 365 for Windows including one of our test machines.

Definitely the right version of Excel 365 but not a sign of dynamic arrays … not even a teenie, tiny dynamic array let alone all the functions Microsoft says are there.

Paying customers will just have to wait for Office software to catch up with Microsoft’s promises.  Not the first time and it won’t be the last.

How does this happen?

It’s hard to understand how this can happen.

How can the ‘What’s New’ page not match the software.  Doesn’t anyone at Microsoft check the public announcements against reality?

Even if the web page has a mistake … why hasn’t Microsoft corrected the page?  Maybe there’s Microsoft’s corporate reluctance to admit mistakes or there’s too many layers of management involved.

As Master Po used to say “Patience, Grasshopper”.  Wait until Office 365 catches up with Microsoft’s promises.

Try File | Account | Update Options | Update Now to make sure you have the latest Excel 365.