Microsoft Office 2010 ends support later this year but there’s no need to panic. Here’s what to do, when to change from Office 2010 and what to replace it.

All the Office 2010 programs will keep working. No change there.

13 Oct. 2020 is the ‘end of support’ date.  That means there’ll be no more security updates/bug fixes to protect against new hacking attempts. 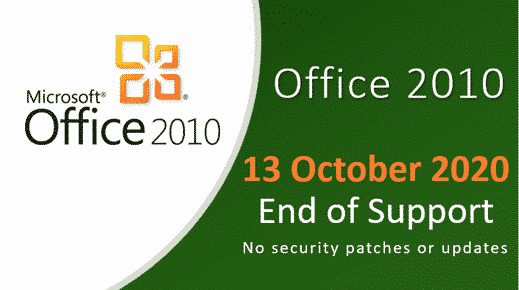 Our advice for the end of Office 2010 is much the same as past advice for Windows 7 etc.

We start with the sage words of the late Douglas Adams …

A lot of the dire warnings from Microsoft, retailers and salespeople can be somewhat dismissed.  They all have a vested interest in scaring people to sell more software and sell it now.

There’s no need to rush out and replace Office 2010.  Even after the 13 October 2020 deadline the software will keep working.

Over time, software past ‘end of life’ becomes more risky because it won’t be updated against newly discovered security bugs in the product.

Definitely consider switching from Office 2010 by, say, the end of 2020.  Do it on your own timetable, not Microsoft’s.

When changing from Office 2010, make sure the replacement software will work well on your computer hardware.  Office 2019 or Office 365 for Windows needs a better computer, especially more memory than Office 2010.

In our view, Office 365/2019 needs a minimum of 4GB of RAM, preferably more if you’re using Outlook for Windows.  Microsoft’s hardware recommendations are, in our opinion, impractically low.

Switching from Office 2010 might mean upgrading or getting a new computer.  So give yourself some time to consider your options beyond just Office 2010.

Thanks for joining us! You'll get a welcome message in a few moments.
Read Aloud in Word for Mac Outlook 365 bug deletes messages