Here are two options to stop Microsoft Office for Windows from automatically updating itself and why you might want to do that.

All versions of Office that have current support (currently Office 2010 and later) get:

Microsoft Office documents are far and away the most common way computers are infected, so fixing security bugs is important.

Office 365 software gets those security & non-security bug fixes plus new and updated features.

Why not automatically update?

Normally Office for Windows will update itself automatically.  Microsoft likes to pretend that’s a good and harmless process but it’s not.

A recent case saw Microsoft release a faulty update for Office. It took another two months for the company to fix the first update. Finally a THIRD patch, weeks later, to fix the second update.  It took Microsoft over two months to finally close the book on that issue (we hope).  See ‘How did this happen? a chain of bad bug fixes’.

Microsoft is slow to both admit an update mistake and slow to repair patch problems.  Only in major cases will the company quickly release a repair update. Normally they stick to their monthly release schedule, leaving customers hanging in the meantime.

Even the Office 365 new and changed features don’t suit everyone.  Some customers, understandably, prefer stable and unchanging software they can depend on.  (Ask Excel users confused when #SPILL errors started appearing last year).  That’s an attitude Microsoft chooses not to acknowledge; they believe the rolling release of Office 365 changes to be an absolute good.

Update Automatically or not?

It’s hard to decide: update automatically or not.

According to Microsoft there’s no question: all customers should automatically update.

But that’s a self-serving and unrealistic recommendation which fits Microsoft’s perception of its own infallibility.

The Joys of being a late Office adopter

The direct way to disable updates is in any Office programs; Word, Excel, PowerPoint.  It doesn’t matter which program you use, the same setting applies to all of Office. 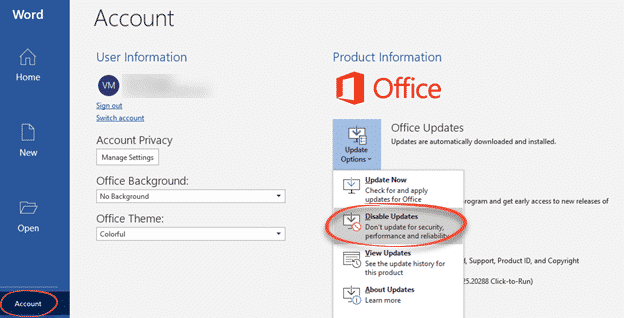 Once that’s done, there’s a clear message of the update status.

Updates are disabled until specifically re-enabled.  Unlike Windows updates which can only be paused for a limited time before automatically restarting.

We do NOT recommend disabling Office updates for a long period.  Perhaps every month or two let Office update, at a time of your choosing.

Metered Connection is a useful, but little-known feature, in Windows 8/8.1 & Windows 10.  It’s a way to tag a network connection as expensive or limited so that Windows / Office doesn’t use the link to download updates. The idea is to limit downloads on expensive connections (like mobile phone data, roaming) or slow, shared links (e.g. remote locations).

Office 365 and Windows itself will not download updates on a metered connection.

Make all your main Internet connections ‘metered’ and updates should cease.

In Windows go to Settings | Network & Internet  | select a network connection then scroll down to Metered connection.

Windows 10 for Microsoft Office users has a whole chapter devoted to Metered Connections.

If your computer gets another Internet connection that’s not Metered, updates will start downloading.

Overall, it’s better to disable updates in Office.  Metered Connections is an alternative to consider in some circumstances.