Oh what a tangled web Microsoft weaves …. a patch for Office has caused another bug in all versions of Access (365, 2019 back to 2010). The bug is the latest in a series of blunders for Office updates. It’ll take until next month for all customers to get a ‘patch of a patch of a fix’ but Microsoft has the gall to already mark their mistake as ‘fixed’.

The latest Access bug was caused by a buggy Office update which itself was supposed to fix a previous faulty patch for a security bug.  In football this would be three ‘unforced errors’ in a row or three ‘own goals’ by the same player.

First we’ll explain the bug Microsoft added to Access and what you can do about it.  Then we’ll look at the series of blunders from Microsoft over several months that led to this trouble.

See: Why updating Office is like the Kobayashi Maru a ‘no win scenario’

The query is wrongly marked as corrupt when it’s actually a bug from Microsoft.  According to Microsoft, the error happens for an Update query that:

That’s a pretty common situation. No wonder there have been complaints from Access customers around the world.

The latest bug happens after installing one of these 12 November 2019 patches.

More on these patches below.

According to Microsoft this problem is ‘fixed’. They make sure that’s in bold in the article about their mistake.  But in the table below that boast, some customers are still waiting and some Access 2019 users will be waiting almost a month for Microsoft to repair its own mistake! 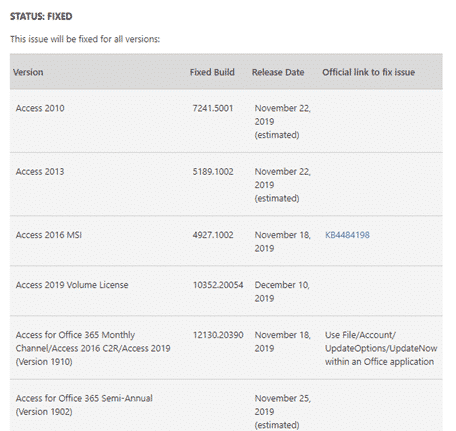 Source: Microsoft article about ‘Query is corrupt’ bug as at 20 Nov 2019

The problem isn’t ‘fixed’ until ALL Access users can get back to normal. Paying customers should not have to wait a month for a fix to a problem caused by Microsoft in the first place.

If you can’t wait for Microsoft, there is a workaround.  The bug only occurs if you update a Table directly.  Updating a Query is fine even if that Query just points to the table.

Microsoft offers this example code. This query triggers the bug:

Make a new Query that points to the entire Table.

Then change the original query to reference the new query not the table directly.

That will get your code working again.  Of course, for many projects it’ll be a lot more complicated than this example.

How did this happen? – a chain of bad bug fixes

Amazingly, this bug in Access happened because of a faulty bug patch, for a previous faulty update, that itself fixed a bug caused by a security fix in Office.

In other words, Microsoft has caused a series of problems for their Office customers by not properly testing software patches, then making customers wait for months for fixes.

The Access query bug troubles started back in September (over two months ago) when all supported versions of Office got a security patch.  Nothing new there, almost every month Microsoft has to fix some security lapse in their products.

Another 12 November 2019 security update KB4484113 triggers both the ‘File failed to upload’ and the ‘Query is corrupt’ bugs!

See: Why updating Office is like the Kobayashi Maru a ‘no win scenario’

The Joys of being a late Office adopter

Thanks for joining us! You'll get a welcome message in a few moments.
Protect against the latest ransomware attack via Excel USB condoms, they really are a thing and there are two different types!