Stephen Fry’s latest TV show uses Comic Sans as its primary font, so the haters of the common font have risen in protest.

We’ve talked about Comic Sans before. It’s not a bad font; in fact it’s technically very good. However it has been ‘done to death’ and is best avoided.

A group of passionate Comic Sans haters go so far as suggesting use of the font should be ‘punishable by death‘. We liked the suggestion that “It’s a bit like reciting Hamlet in a Mr Bean voice“.

Fry’s Planet Word is a very interesting show about language currently showing on BBC 2 in the UK. Even people like us who suffer from ‘Stephen Fry overkill’ seem to agree that the show is informative and engaging.

But did the makers have to choose Comic Sans as the title and general use font throughout the program? Even the ‘tree of languages’ is entwined with a Comic Sans vine. 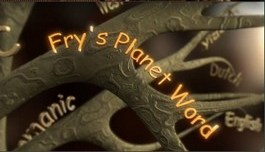 Of all the many fonts available to a professional film maker, did they have to choose the one most reviled across the world?

Stephen Fry distances himself from the choice. “Actually, all, Comic Sans used as #PlanetWord font w/o my knowledge. Did final commentary, captions done later. Never shown them. *ashamed*”

As we noted over two years ago, there are Comic Sans alternatives either from Microsoft products or some free font sites.

Thanks for joining us! You'll get a welcome message in a few moments.
Font Embedding in Microsoft Office Word 2007 Command Finder