Is it safe to join Office Insiders?

Microsoft has many little ‘ads’ or suggestions that Office 365 users (Windows or Mac) join the Office Insiders program.  Is it safe to become an ‘Office Insider’ and why is Microsoft pushing it so much?

Office Insiders is the testing program for new Office features.  It’s what used to be called ‘beta testing’ or ‘previews’.  It involves using software with new or changed features that might not be working properly or have annoyances that need fixing.

Office 365 for Windows customers can join Office Insiders from the File | Account pane. Office 365 for Mac Help | Check for Updates.

There are roughly four stages to the release of a new/changed Office feature:

Internal  – there’s a lot of in-house testing at Microsoft both automated and human (the latter reduced in recent years).  It can include some non-Microsoft people under secrecy agreements.

Insider / Fast – the first public testing level.  This software has the newest features and has the greater risk of problems.  Usually updated each week.

Monthly Channel (Targeted) / Slow – after Fast testing the software is refined and released to more testers.  Slow releases should be closer to what the public will see and be a lot more stable.  Updated monthly.

Monthly Channel / Public – what Office 365 customers get automatically with their regular updates.  ‘Monthly’ level is what most subscribers get.

Some organizations choose ‘Semi-Monthly Channel’ to limit updates to twice a year. This channel has its own preview level “Semi-annual Channel (Targeted)”

The ‘Insider’ and ‘Monthly Channel (Targeted)’ names were introduced in 2017 as ‘simplified’ Insider naming.  Most people in and out of Microsoft keep using the ‘Fast’ and ‘Slow’ labels. Office for Mac still uses the Fast/Slow names in the Update dialog box, even though the names changed over a year ago. 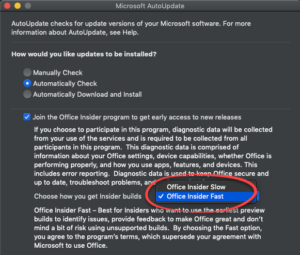 Why does Microsoft push Insiders?

Microsoft has lots of little encouragements, almost advertising, for people to join the Insiders group.  Even the name ‘Insiders’ was chosen to make people feel special and part of some select group.

Microsoft pushes the Insiders for their own selfish reason.  Insiders uses paying customers as a large unpaid block of beta testers.  It’s cheaper than all the paid testers that were ‘downsized’ off the Microsoft payroll a few years ago.

The problem, as Microsoft has discovered in recent months, is that having all these unpaid testers isn’t much use if the company doesn’t have enough staff to read and manage the bug reports from Insiders.

The main benefit of Office Insiders is getting new features faster than the public. Some like to check out anything new while others target a specific innovation.

We know many people who joined the slow Insiders track because they were eager to use the Stock data type which adds near real time financial information into Excel.

Now that feature has been publicly released, those folks might drop the Insiders track and return to regular public releases.

There are various downsides or risks to consider before becoming an Insider. Some are mentioned by Microsoft, others are not.

Instability – test software might not work correctly. At worst, the program might ‘crash’ and documents lost.  When there’s a problem it’s hard to know if it’s a beta software bug or a wider problem.

Privacy – Becoming an Insider means giving up some of your privacy to Microsoft.  ‘Diagnostic data’ is mostly anonymous but could include content and other identifying information.

Document Compatibility –  documents, worksheets and presentations made on Insiders software should work on non-Insiders Office.  The exception is when the Insider-made files include features not yet in public Office releases.  For example, a new Excel function will cause an error when opened on a non-Insider Excel.

Software Compatibility – any Office add-ons or VBA code might not work or work properly on an Insiders build.

FUD – general Fear, Uncertainty and Doubt.  If there’s a problem, it’s hard to know if it’s a general bug or something specific to the Insiders build.  Support for other programs might not be available if you’re using Office or Windows Insiders builds.

If you are an Insider, send smiles or frowns to Microsoft from the little face icon at top right.

See how to report Office bugs to Microsoft.

There’s also the less-used ‘Smile’ option to tell Microsoft about something you like.

Stay away from Office and Windows Insiders.  For most people the disadvantages outweigh the few advantages.  Insiders is only for people confident using their computer with good backups and willing to accept the risk of delays and problems.

By all means, switch to Office Insiders Slow / Monthly Channel (Targeted) if there’s something new that you just can’t wait to try (like Stock data type).

If you’re worried about stability, definitely stay away from ‘Fast Track’.  Slow Track is usually stable.

Of course, here at Office Watch we use Insiders software because it’s our job to keep up with what’s new and coming in Microsoft Office.  If we had a ‘normal’ job we’d stay away from Insiders.

Have a stable Office option

Don’t rely entirely on Office Insiders for your work.  Have a fall-back copy of public Office 365 that you can use if the Insiders build is causing trouble.

A virtual machine (Hyper/V or VMWare Workstation) can run either Office 365 Insiders or public version.  Or have stable Office on a second computer.