Saving OneNote notebooks be saved locally and not in the cloud

Many OneNote users would like to save their notebooks on their computer and not OneDrive.  Saving a notebook to a local folder is possible. It might become impossible in the years ahead.

OneNote 2016 for Windows supports saving a notebook to any folder.  OneDrive is the only notebook option in other OneNote apps (including OneNote for Mac).  But there are some alternatives that might be enough/

OneNote has one big downside, it’s become an almost entirely cloud-only service.  In most OneNote releases users are forced to save their notebooks to OneDrive cloud storage.

For some people and organizations that’s a problem.  They want to keep their private information secure on hardware they control.  Some organizations need local storage for legal reasons which prevent cloud storage.

It doesn’t seem likely to change. Microsoft shows no sign of relenting because it’s in their corporate self-interest to have everything linked into OneDrive or their other cloud services.  Microsoft staff seem genuinely puzzled by requests for non-cloud notebook storage. They don’t seem to understand the privacy concerns, only the benefits of cloud storage (availability, sharing etc).

OneNote 2016 for Windows lets you create a new notebook to any folder including local folders or network shares.  Go to File | New | This PC. 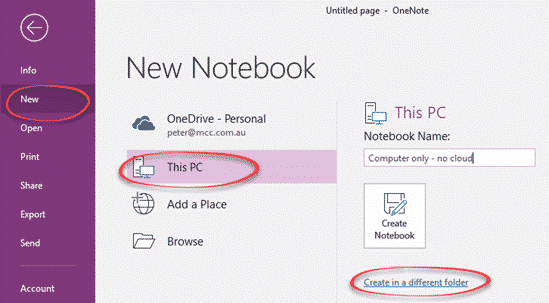 To save the notebook to the default OneDrive folder ( Documents/OneNote Notebooks ) type a Notebook Name and click ‘Create Notebook’.

‘Create in a different folder’ lets you choose any other folder (local or network).

Only for the moment …

OneNote 2016 for Windows is a dead-end.  Microsoft has announced that there’ll be no more development of the OneNote desktop program.  Only security updates until 2025.

For Microsoft, the future of OneNote is cloud-only storage.  All the OneNote apps, OneNote Online and OneNote for Mac can only handle notebooks saved at OneDrive.

There are some alternatives or workarounds that might be enough for people who don’t want cloud storage.

Sync your Notebooks – off

The syncing of notebooks to OneDrive can be disabled in the OneDrive app for Windows 10.  Go to Settings | Options, turn OFF the Sync your Notebooks | Sync notebooks automatically.

This is an ‘all or nothing’ setting.  It’s not possible to have some notebooks synced with others saved locally only.

Instead of locally saved notebooks, save on OneDrive with password encryption. It’s not ideal but might be enough.

OneNote sections can be password protected. They are saved in the cloud with encryption, which should prevent unauthorized access.

Thanks for subscribing!
Word Transform and other ways to convert documents to HTML Home Use Program, Office 365 renewal clarified, sort of
View our latest eBooks!