Open multiple docs in Word or PowerPoint for iPad

iOS has multiple window or side-by-side support already, but Word and PowerPoint didn’t allow more than one document open at a time.  That meant you could have a Word document open alongside another app but not another Word doc.

Now Word and PowerPoint have been upgraded to allow multiple documents to be open. In other words, two instances of the Word or PowerPoint app can be open at once. 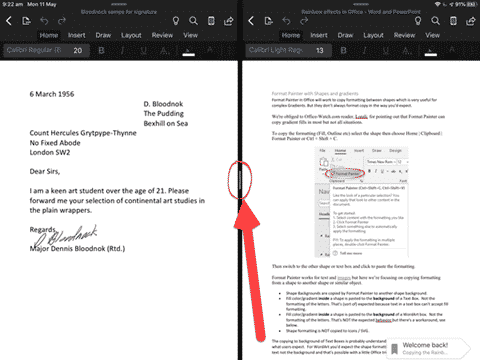 The vertical divider can change the views to make one side larger or drag the divider all the way to the left or right to go full screen again.

How to open in a new window

There are three ways to open a second document or presentation.  Each takes a little getting used to but OK once you get the hang of it.

This is probably the easiest way to open a second document.

From a Recent, Shared or Open file list in the app, drag the file to the iPad screen edge.  That opens the document or presentation side-by-side.

Also in the Recent, Shared or Open tap the … menu for any file in the list, then tap Open in New Window.


Swipe up to the dock

In Word or PowerPoint, swipe up to open the dock. Tap and hold the same app icon in the dock then drag it to the left or right edge of the screen. That opens a side-by-side window with the Word instances showing as thumbnails.

Tap a document thumbnail to open it (if available) or choose a File Open pane to select another file.

No word on adding multiple workbook support to Excel for iPad, but it can only be a matter of time.

Opening Multiple Documents required iOS 13 on an iPad with Word 365 or PowerPoint 365 for iPad version 2.37 with a Microsoft 365 plan.

Turn your smartphone into a webcam – iPhone, iPad or Android

Turn your iPad into a second screen with Mac touchbar

Which version of Office for iPhone, iPad do you have?

Thanks for joining us! You'll get a welcome message in a few moments.
Excel worksheet protection is not encryption Blur and Virtual Background choices for any online meeting