Turn your smartphone into a webcam – iPhone, iPad or Android

Need a webcam for online calls and meeting? No need to buy one because your iPhone, iPad or Android phone can double as a webcam.  All you need is the right app.

At the moment, it’s hard to even get a webcam.  All the good models are sold out or available at top price.

Your smartphone already has two good cameras (at least) and a microphone too.  Use that instead, there are many advantages.

The connection is usually wireless so there’s more flexibility.  Put the smartphone anywhere or even carry it around.

There are a lot more options for positioning the camera compared to the fixed webcams in most laptops.

Maybe point the camera out the window so other people see your view (assuming it’s nice) while you talk.  For demonstrations point the phone camera so people can see what you’re doing.

It’s heaps cheaper than buying a webcam and can be setup quickly, without even leaving home.

Use an old phone

Dig out that old smartphone and use it as the webcam.

There might be issues with older phones which don’t have more recent versions of the operating system (iOS or Android) that the apps need.  Check compatibility of the app and the phone OS.

The apps can let you use the smartphone as a remote monitor for another room or location.

There are a few minor ‘cons’ or at least things worth keeping in mind.

Running the camera and a wifi video/audio stream is a big power drain on the device. It’s best to plug the smartphone into external power. The device may also get hot but not dangerously so (it’s similar when tethering/personal hotspot). All you need do is keep the device ventilated all around and not up against a solid surface.

Ideally you have a stand to position the smartphone and camera.  A small tripod with smartphone bracket is ideal.  We used the bracket from a selfie stick screwed into a tiny tripod with a standard camera ¼” thread. 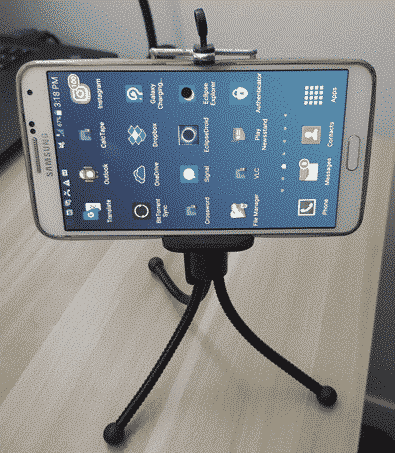 Tip: if possible get a tripod and bracket with the ¼” screw connector. Not a combined stand and bracket. That gives you a lot more options to mix/match equipment later, which is what we managed to do.

A few carefully positioned books etc might be enough as a makeshift stand.

Using an iPad or tablet might be easier because there’s often a cover which doubles as a stand.

You can’t pick up the phone and use it while it’s acting as a camera.  Apps will work in the background, as usual. That’s why we mentioned the old smartphone option above, so you can use your regular phone during an online call.

Some ‘webcam’ apps do not have the PC/Mac software, avoid these.  You need the extra software to make the video and sound show up as a camera and microphone options in calling software.

We’ve had good results with DroidCam which has a free version you can try. The paid version DroidCamX is a mere €4.29.

The install on smartphone, PC and Mac is smooth and connection easy.  Connections via Wifi or cabled.  The paid app has zoom, flash, auto-focus, rotate and snapshot options on the computer.

In programs like Zoom and Skype Web, the Droidcam appears as another camera available to the computer.

Same with the microphone ….

There appears to be a problem with Skype for Windows.  Some people fix it by uninstalling/reinstalling Skype, others use the web based version of Skype.

We’ve not been able to test any Apple device options. Here’s a list of some recommended apps.

If you’ve used or try one of these, please let us know your experience so we can share with Office Watch readers.

EpocCam  seems like a well regarded app for both iPhone and iPad. Free plus a premium version. Also available for Android though we’ve not been able to get their Windows drivers working in Windows 10.

Get ready to Zoom ….

Protecting yourself and others on Zoom

Using a GoPro, Camcorder or DSLR as a webcam

Look better in an online call – simple, easy and low-tech

Blur and Virtual Background choices for any online meeting

Thanks for subscribing!
Microsoft 365 is NOT a big change Converting Google Sheets to Excel
View our latest eBooks!